Bangladesh’s top Archer Ruman Shana narrowly missed out on the Tokyo 2020 Olympics record after conceding a defeat in the second round of recurve men’s individual event at Yumenoshima Park Archery field on Tuesday.

Although a total of six athletes from Bangladesh are taking part in the ongoing Olympics in four different disciplines, this was the only event that could make them hopeful of claiming any big success.

However, the 26-year-old Bangladeshi archer started the day with some expectations, snatched a big 7-3 set points win over English archer Tom Hall in the day’s first round of elimination phase.

But the 30-year-old English archer turned around in the fourth set and beat Shana by 27-25 points. The match went to the fifth set where Shana tasted his first-ever win in the Games beating Tom by 29-27 points.

Confident Shana started with the win in the next round (round of 16) against Canadian archer Crispin Duenas who beat Moldovan archer Olaru Dan by straight 6-0 set points in their previous round of 32 matches.

Shana won the first set by 26-25 points but conceded 28-25 and 29-27 set points defeats to Crispin in the second and third sets. Then Shana turned around in the fourth set, secured a 27-26 points victory and tied the score at 4-4 set points. 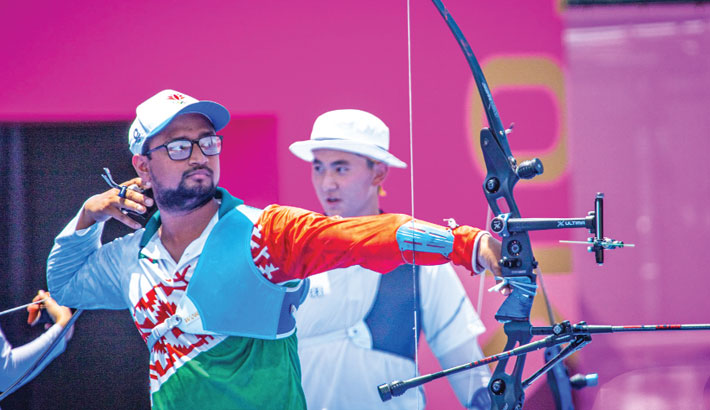 In the fifth and final set, which was actually a match decider, Shana conceded a 26-25 points defeat. Crispin qualified to the pre-quarterfinals beating the Bangladeshi archer by 4-6 set points.

“I’m really a little bit upset because ….10 to win. I had a very good chance to win this match. My target is the 2028 Olympic gold, so I’m also going to play for the 2024 Olympics. I shall do my best, Shana told World Archery in his immediate reaction after the elimination round.

Shana scored 662 out of 720 to rank 17th among 64 male archers in the ranking rounds of the event. Though the Bangladeshi archer made a brilliant start with a score of 337 in the first 36 shots, he failed to carry the momentum and scored 325 in the last 36 shots.

However, the day’s other biggest disappointment was the South Korean archer and top-seeded Kim Je Deok’s early exit. Kim was eliminated after conceding a 3-7 set points defeat to German archer Florian Unruh in the second round.

Kim, who already earned two gold medals in the mixed team and men’s team events, had a chance to become the first triple gold medalist of this game.

“Every athlete who participates in these Games, they’re all going to say it’s bad. But I think I will have lots of opportunities in the future, so I don’t feel so bad. I will have another chance,” said Kim in an immediate reaction.

Another Bangladeshi archer Diya Siddique also qualified for the women’s elimination rounds. The 17-year-old Bangladeshi girl will play against 29th ranked Dziominskaya Karyna from Belarus in the round of 32 on Thursday at the same venue.

Meanwhile, the pair was disappointed in the mixed event as they were eliminated after conceding a straight 0-6 points defeat to the top-ranked South Korean pair --  Kim Je Deok and AN San in the round of 8 of that event.