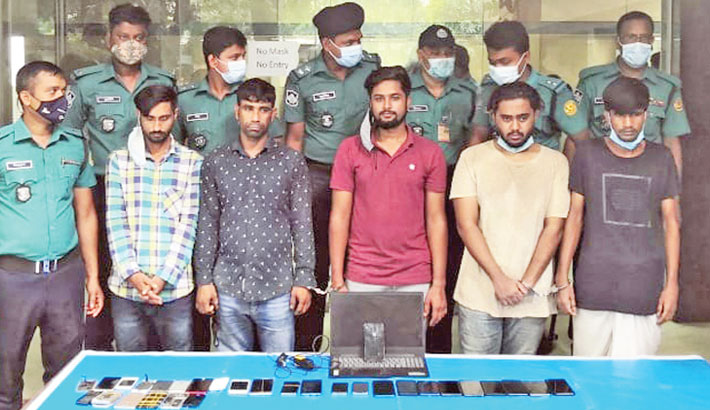 Police on Monday produce five persons before journalists after arresting them in connection with stealing the phone of Planning Minister MA Mannan, which was snatched from the capital’s Bijoy Sarani area more than one and half months ago. —SUN photo

Police recovered the mugged iPhone of Planning Minister MA Mannan on Sunday, nearly two months after it was snatched from him at Bijoy Sarani in the capital.

Sazzadur Rahman, deputy commissioner of Ramna Crime Division of police, briefed this to reporters at the DMP media centre in the capital on Monday.

“Sometimes, unexpected incidents occur during traffic jams on the city roads.  Such an incident happened on May 30. On that day, our planning minister was returning to his residence from office. His car was stuck in the traffic jam at Bijoy Sarani. The minister was talking over phone opening the car widow. Just then, a mugger snatched the mobile phone and went away,” the police officer said.

Later, a case was filed with Kafrul Police Station on June 1. After the incident, various units of police began working to recover the phone and arrest the mugger, he said.

On July 12, two muggers riding on a motorbike snatched a purse of a woman named Nusrat Jahan from in front of NCC Bank at Sathmasjid Road in Dhanmondi at about 5:50pm. There was an iPhone in the purse.

The woman filed a case with Dhanmondi Police Station. During investigation of the case, police identified Sogir and Sumon and arrested them with the motorcycle.