French director Julie Ducournau is only the second woman to scoop the prize, for a movie that was one of the wildest, sexiest and most violent ever shown at the Cannes film festival.

‘Titane’ tells the story of a woman who has sex with cars and kills without a care, with brutal scenes that had many cinema-goers shielding their eyes during the opening night.

It was a huge night, too, for the previously unknown Norwegian actress Renate Reinsve, who was rocketed to stardom by her role in ‘Worst Person in the World’. 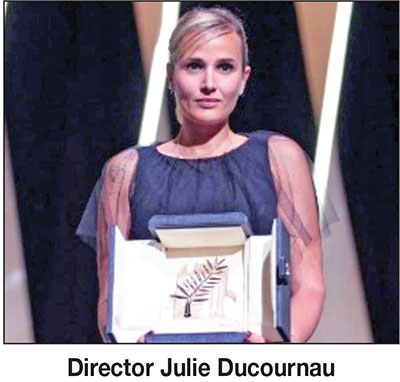 Her role as a twenty-something searching for her identity and pinballing through relationships was a sensation, and caught the 33-year-old totally unprepared.

Other winners on the night included Leos Carax as best director for ‘Annette’.
The second-prize Grand Prix was shared between Iran’s two-time Oscar winner Asghar Farhadi ("A Hero") and Finland's Juho Kuosmanen ("Compartment

No.6"), while best screenplay went to Japan's Hamaguchi Ryusuke and Takamasa Oe for "Drive My Car".
Last year's festival was cancelled because of the pandemic.

Homaira, Sumon pair up in a drama after 10 years