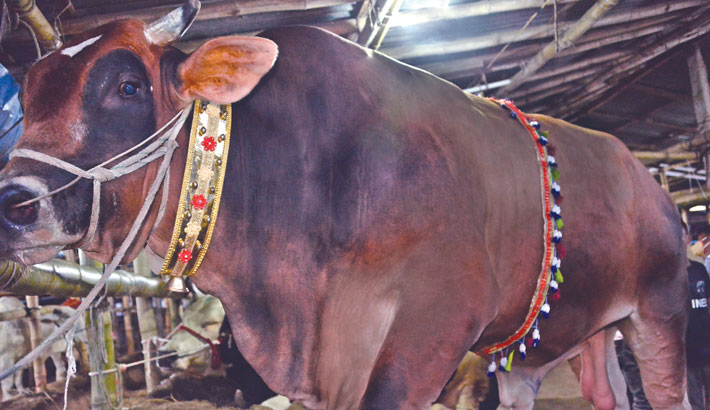 An attractive bull with reddish-black skin, for which the dealer is asking a price of Tk 2.5 million but gets offers of up to 1.2 million, put on display at Sagorika cattle market in Chattogram on Sunday. This year, the price of cow at cattle markets in port city is relatively higher than in the previous year, while the supply is huge. —Rabin Chowdhury

CHATTOGRAM: Though a large number of sacrificial animals have already arrived on cattle markets in the port city, traders are yet to make expected sale.

However, the sale is expected to get momentum from today as only two days to go to Eid-Ul-Azha, the second largest religious festival of the Muslims.

Chattogram City Corporation (CCC) leased out six cattle markets including three permanent ones in the city while around 200 cattle markets are set up at 15 upazilas under the district.

While visiting Bibirhat Cattle Market in the city on Sunday, this correspondent saw a huge number of visitors roaming on the market and asking prices.

Shahidul Islam, a resident of Bahoddarhat, said he came to buy a middle-sized cow at a cost of Tk 70,000, but the price is much higher.

“I will go to farm if my expected one is not available here,” he said.

Trader Jamir Uddin, who has come from Kushtia, said he brought 30 bulls and 12 of them were sold until Sunday. “We are yet to get a good number of buyers,” he said.

On the other hand, a number of buyers now tend to buy cows from farms and online platforms to avoid health risk due to the pandemic.

The price is also comparatively less on the farms and in online platforms than that of the cattle markets, they said.

Besides, a good number of unauthorised cattle markets were also spotted in different areas of the port city.

However, buyers and traders were not maintaining social distancing while many came without face masks.

Lessee of Bibirhat Cattle Market Md Anwar said he may incur a huge loss this year if the trade volume doesn’t increase within next two days.

“Around 10,000 sacrificial animals have been brought on the market, but the sale is very poor until Sunday,” he said.

The total sale across the country stands at around Tk 21.42 billion during the period, they said. Sources in the Chattogram District Livestock Office said 756,334 animals were grown at 13,500 households, permanent and temporary farms against the demand of 809,000 in Chattogram for this Eid-Ul-Azha.

The shortage of around 52,000 animals can be filled with the animals from hill tracts and different parts of the country.

Chattogram District Livestock Officer Dr Md Reazul Hoque told the Daily Sun that there will be no shortage of cattle in the district as cattle were brought from outsides.

However, the flow of bringing cattle from outside may decrease under the influence of coronavirus, but it will not leave any major impact on the market and supply, he said. “We assigned mobile teams with the task of monitoring the cattle market,” Dr Hoque said.