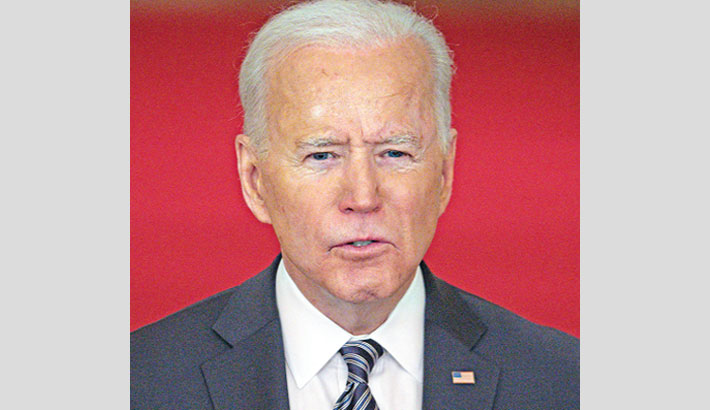 WASHINGTON: US President Joe Biden on Saturday denounced as “deeply disappointing” a federal judge’s decision curbing a programme that protects undocumented migrants brought to the country as children, reports AFP.

In a statement from the White House, Biden said the Justice Department would appeal the ruling by Texas-based Judge Andrew Hanen, while adding that “only Congress can ensure a permanent solution by granting a path to citizenship for Dreamers,” the young people brought to the US as children.

DACA supporters received a temporary reprieve in June 2020 when the Supreme Court ruled in a 5-to-4 vote that the Trump administration had not provided sufficient justification for its attempts to end the programme.  It made clear it was ruling largely on procedural issues, and left open the possibility of further challenges. Hanen’s ruling was limited, however. It is unclear how the nine high court justices might rule if the case again reaches them.

The Deferred Action for Childhood Arrivals programme, instituted by then-president Barack Obama in 2012, covers around 700,000 people, conferring legal status on them, as well as the right to work. For many, America is the only country they have ever known.  In his ruling, Hanen said Obama exceeded his authority when he instituted DACA by executive order. He called the order “unlawful.” The government must stop accepting people to the program, Hanen said, though he added it could still receive applications.

He said the ruling did not require the Department of Homeland Security or Department of Justice to “take any immigration, deportation, or criminal action against any DACA recipient, applicant, or any other individual that it would not otherwise take.”

The ruling also did not immediately affect the status of people already accepted to the program.

To apply for DACA protection applicants must have arrived in the United States before age 16.

Applicants must be in school or have a high school degree or equivalent, or have been honorably discharged from the military and have a clean criminal record.

In 2017, as part of his far wider push to limit immigration, then-president Donald Trump tried to dismantle DACA, insisting Obama had exceeded his constitutional powers. That triggered the lengthy court battle that brought the case to the high court last year.

Since taking office, Biden has looked to strengthen the program, as well as initiate wider immigration reform.

Democrats in Congress have pushed for legislation that would permanently settle the status of the childhood arrivals, but immigration policies have long stalled in the face of Republican opposition.

In a tweet on Saturday, Obama echoed Biden’s call for Congress to find a permanent solution for the Dreamers.

“For more than nine years, DREAMers have watched courts and politicians debate whether they’ll be allowed to stay in the only country many of them have ever known. It’s long past time for Congress to act and give them the protection and certainty they deserve,” he wrote.

After Friday’s ruling, House Speaker Nancy Pelosi called on Republicans in Congress “to join us in respecting the will of the American people and the law, to ensure that Dreamers have a permanent path to citizenship.”