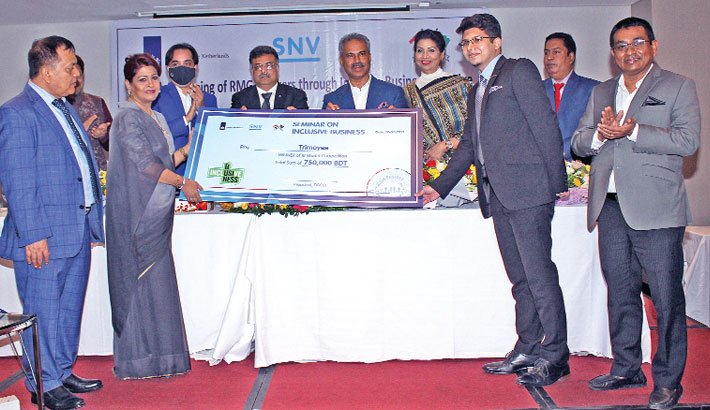 Four startups have been awarded for running well-being projects for workers in readymade garment factories following the sustainable development goals.

The projects are Trimoyee for eye treatment, Konna for women medical awareness, CMed for online medical service and ProteinNest for whole protein food in affordable packages for the garment workers.

Dutch-Bangla Chamber of Commerce and Industry (DBCCI) and SNV Netherlands Development Organisation jointly announced the awards at a programme at Le Meridian Hotel in Dhaka on Saturday night.

“The workers are the main part of our success as the country is now the second largest RMG exporter in the world thanks to their contributions,” said BGMEA president Faruque Hassan.

“We now believe that in the next decade, Bangladesh economy will grow at around 8 percent or perhaps even faster with the RMG industry playing a vital role,” he said.

He appreciated the start-up young social entrepreneurs who shared their challenges, possibilities and won the piloting project for the well-being of RMG workers.

The readymade garment industry of Bangladesh has made significant progress in the areas of sustainability, especially workers well-being and industrial relations, he said.

“Starting from the elimination of Child Labour in mid-nineties, and the emerging compliances issues including timely payment of wages, ensuring the minimum wage, overtime, hygiene at workplace, and so on, the industry has responded well on all the issues of compliance and workers’ rights”, he added.

The BGMEA President said since the tragic building collapse accident in 2013, a paradigm shift had taken place in the areas of structural, fire and electrical safety at workplace which was supported by the international brands and donors like ILO, in addition to the lead role played by our government.

Moreover, the Labour Law was amended twice in 2013 and in 2018, and Labor Rules was promulgated in 2015 to ensure workers well-being and safety at workplace. Formation of safety committee in every factory has been made mandatory, workers participation committee has also been made mandatory through elections. A central fund has been created under the supervision of the government where garment factories are contributing $10 million of their export receipts to be used for the workers’ welfare purposes, he added.

DBCCI chief Anwar Shawkat Afser said the inclusive business can be recognized as a financially viable from social enterprise status into serving broader markets and achieving higher returns, or highly profitable companies that want to deepen their reach towards more valuable social contributions.

The RMG industry has created 4.4 million direct jobs while the sector’s total employments including backward and forward linkage industries are around 10 million.

Around 50 million people are indirectly depending on the country’s garment sector for their livelihoods, the industry insiders said.