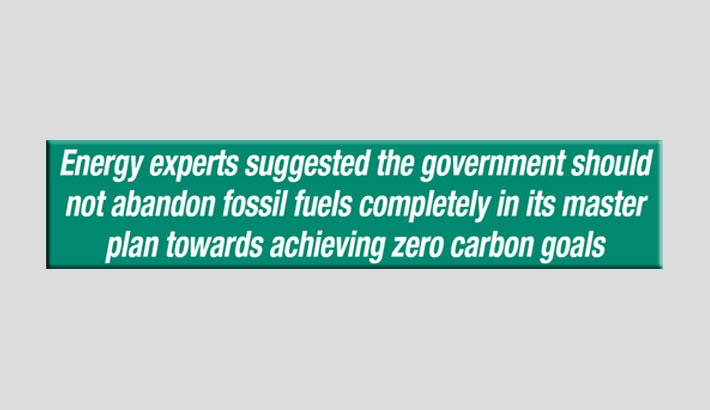 Bangladesh needs to adopt an appropriate mix of both green and fossil fuels to ensure sustainable power supply to all customers in the country at affordable prices, said energy experts.

According to them, the world cannot completely eliminate the use of fossil fuels in near future and not even by 2050.

The remarks were made at a webinar titled “Power-Energy Integrated Master Plan” on Saturday, organized by M2K EP Talks.

UN special envoy of the Presidency of Climate Vulnerable Forum Abul Kalam Azad attended the event as the chief guest.

The panelists said the home-grown, experienced energy and power sector professionals should be tasked with formulating a comprehensive power and energy master plan.

The master plan must be “realistic and not prepared on the basis of emotions,” they said.

An implementable road map must also be included in the master plan for regular monitoring achievements, they emphasized.

Referring to a report of the World Energy Council Abul Kalam Azad said that 79 percent of the power was generated from fossil fuels in 2010.

“For efficient use of the fuel and energy, the fossil fuels in 2050 would still continue contributing more than 50 percent or above.”

“Now an initiative has been taken to prepare an integrated master plan. In my opinion, local experts must be given a priority role during its formulation,” Azad said.

According to him, deeper considerations should have been given before cancelling 10 imported coal-based power plants.

“The world community would not gain or lose anything even if Bangladesh reduces it carbon footprint to zero.”

“The carbon footprint of Bangladesh is only 0.6 tonne while that of USA is as high as 16 tonnes. We should have mined our own coal and utilize,” the envoy said.

He said, “We could not achieve noticeable progress in the development of renewable energy. Alongside of solar we must  consider developing wind energy especially offshore wind.”

“Alongside developing LNG import infrastructure we must expedite exploration of own petroleum resources. We must continue our efforts for expanding cross border energy trading,” Azad said.

Muqtadir Ali observed that lack of coordination among the stakeholders is the main problem.

“Most of the projects perceived in the plans cannot be implemented on time. Hence the achievements of plans become questionable.”

He also echoed Azad that the master plan for energy sector should be prepared by local experts.

Energypac CEO Humayun Rashid pointed out the existence of various uncertainties in the power and the energy sectors. “There is no option to ensuring safe, quality and uninterrupted power for industrial development and economic growth,” he said.

According to him, the private sector must also be included in the formulation of integrated power and energy master plan.

He said, “Failure in sending the rental and quick rental plants on retirement as planned is another reason.”

“Under no circumstance, spinning reserve should exceed 25 percent,” Kabir added.

“Fuel mix is almost ready. Solar must be given priority this time. We can not wait for our own gas. LNG import is essential for power generation,” he said.

Engr. Khondkar Abdus Saleque from Melbourne stressed that due priorities must be given to economic exploitation of own primary fuel resources.