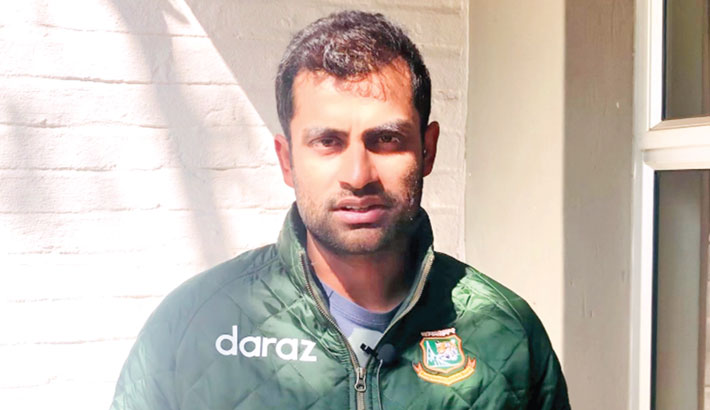 Bangladesh ODI skipper Tamim Iqbal said on Saturday that he’s satisfied with the overall contribution from the juniors in their first ODI triumph over hosts Zimbabwe which gave them a 1-0 lead in the three-match series.

Bangladesh will be eyeing to complete their first ODI series win in Zimbabwe since 2009 and also take sweet revenge of their consecutive series defeats in 2011 and 2013 respectively when they take on the hosts in the second ODI in Harare today.

Liton Das and Sakib Al Hasan hogged all spotlight in the opening match after Liton scored a century while the all-rounder completed a five-wicket haul which helped the Tigers earn a convincing 155-run victory over Zimbabwe.

“I always say the juniors need to perform and it’s a perfect platform for them,” Tamim told reporters, adding that he’s impressed with Afif Hossain and Mehidy Hasan’s crucial innings that helped Bangladesh post a challenging total.

“Liton (Das) played a very good innings and we always say celebrate the fifties and the hundreds, but the little contributions also matter much to me. Afif’s (Hossain) innings in the last match was very important and if he hadn’t played the innings, then we couldn’t have scored 275+ runs and maybe we would have scored 30-40 runs less.

“I’d also say that Miraz’s (Mehidy Hasan) 22-23-run (26) innings was also very important for us and if we had lost another wicket after bothLiton and Riyad (Mahmudullah) Bhai departed, then we could have struggled to make 230-240 runs. So I always like to give importance to these little contributions,” he added.

Tamim added that though they have won the opening game there is always room for improvement.

He also urged that the seniors in the top order need to perform in order to avoid collapse like the way it happened in the first game when they found themselves on the back foot after being reduced to 74-4.

“There is always room for improvement, but obviously, if you lose three wickets for a few runs, then it’s not an ideal thing, so if anyone from the top-order, like me, or Shakib (Al Hasan) can play a big innings then we won’t be in these kinds of situations,” said Tamim.

“So, if any opportunity like this comes in the next match, then we’d make it count. I was very satisfied with the way we bowled, and I was very happy with our bowling approach,” he added.

Tamim also informed that he would have to manage his knee injury to play the series while added that he’s hopeful about Liton’s availability in the match after the opener didn’t keep wickets due to his groin and wrist injury.

The team management confirmed that Liton has very little chance to keep wickets and there is a possibility for Nurul Hasan, who substituted Liton behind the wicket in the previous match, making it into the playing XI in place of Mossadek Hossain in the second game.

“About the injury concerns, everyone knows that I have to play all these three matches with a little bit of a risk but I’m somehow managing it.

“Liton’s condition is a bit better now as far as I know, and he is probably available for tomorrow (today),” said Tamim.

“Mustafiz (Mustafizur Rahman) is still not totally clear as there is a question mark whether he will be available in tomorrow’s match or not. We’ll be able to learn more about it this afternoon. I’m still saying he is 50-50 and everyone else is fit to play,” he added.