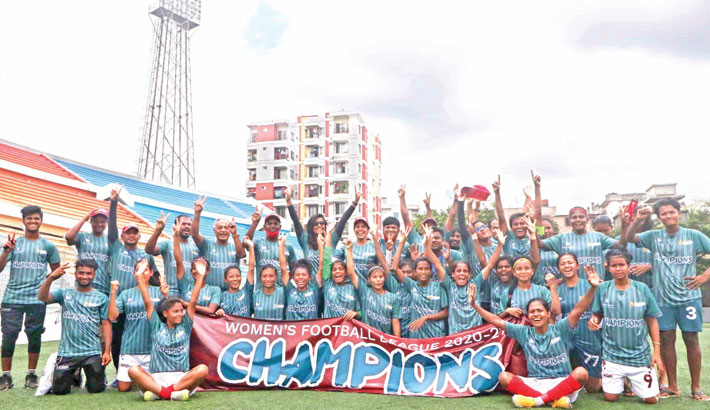 Star-studded Bashundhara Kings retained their Women’s Football League title for successive years after they clinched a massive 18-0 victory over Jamalpur Kacharipara Akadas in Kamalapur on Saturday.

Kings earlier became unbeaten champions in the 2019-20 edition of WFL after winning all 12 matches in the seven-team competition last season.

They also maintained their unbeaten streak in the ongoing league as they earned all 39 points from 13 matches this year, six points ahead of second-placed Ataur Rahman Bhuyan College Sporting Club.

ARB CSC earned 33 points from 13 matches so far and their only two defeats came against Kings. They will play their last match against FC Brahmanbaria on Monday in Kamalapur.

Meanwhile, Kings will play against last year’s runner-up Nasrin Sports Academy during their last match of the campaign on the same day.

“It’s a great feeling. We were champions last year and we did the same this year,” Kings forward Krishna said after the win.

“The management played a big role in our success. The supporters can’t come to the field due to the current situation but they also played an important role. And of course, our players, coaches and supporting staff all should be credited for clinching the title again,” said Krishna, who scored five goals against Kacharipara to climb to the top of the league’s scorer’s list with 24 goals.

“I was a little bit upset as I couldn’t score in the last four to five matches. But now it feels good.

“Last year, I scored 22 goals and my target was to score more goals this year. I've to continue this performance because I want to be the top scorer of the league,” Krishna added. 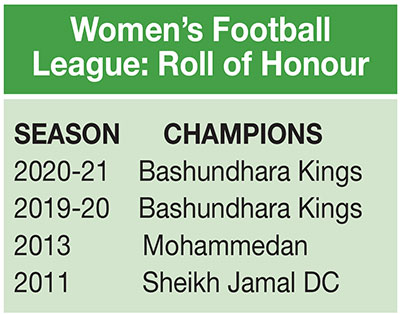 Kings captain Sabina became the top scorer last year with 35 goals and she is currently at the second position with 20 goals.

Sabina said she is enjoying the competition with her teammate Krishna to be the top scorer of the league and will try to surpass her in the last game.

“There is no specific target to be the top scorer but I will try my best in the last match,” said Sabina, who scored three goals in the match.

Kings footballer Summya Matsushima, who is also known for freestyle abilities, started for Kings for the first time during the match and also scored her maiden goal in the 35th minute of the game. Summya earlier played four matches for Kings as a substitute player in the ongoing league.

“I have wasted several close chances in the match. It happened due to my less experience, hopefully, it will not happen next time,” said Summya.

Among others, Shamsunnahar Jr scored four goals, forward Sanjida Akhter scored a brace, midfielder Monika Chakma and defender Anai Mogini added one each while the other goal came through Jamalpur defender Kamrunnahar’s own goal.