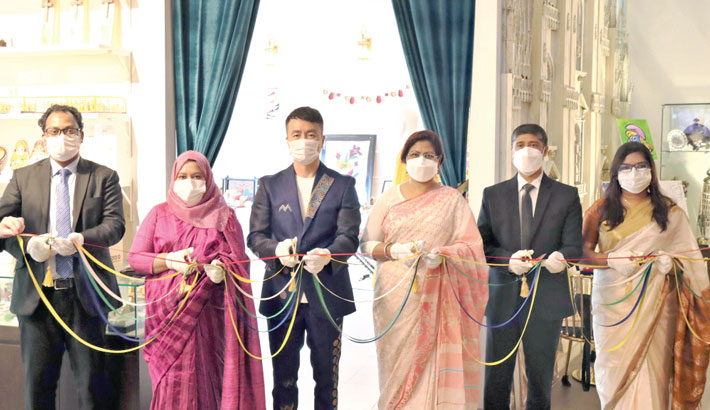 At the initiative of the Embassy of Bangladesh in Seoul, the colourful ‘Bangladesh Pavilion’ in the Multiculture Museum in Seoul was inaugurated on Friday.

Ambassador Abida Islam and Mr. Kim Yun Tae, Director of the Multiculture Museum jointly inaugurated the Pavilion at the presence of Embassy officials by a ribbon-cutting ceremony.

Additionally, books on the Father of the Nation Bangabandhu Sheikh Mujibur Rahman which include-the Korean version of the ‘Unfinished Memoirs’, ‘Bangabandhu the People’s Hero’ and Bangabandhu’s Historic 7th March Speech are displayed at the centre of the pavilion for the visitors.

At the end of the inaugural ceremony, Ambassador Abida Islam presented a plaque of appreciation to Mr. Kim Yun Tae, Director of the Multiculture Museum for his overall cooperation in promoting the culture and heritage of Bangladesh.

She also presented the Director with an oil painting on the landscape of Bangladesh painted by the Ambassador herself.

The Director presented the Ambassador with a plaque of appreciation in recognition of her activities and initiatives in promoting Bangladeshi culture in Korea.

It is hoped that this pavilion will make the general public of South Korea more interested in the culture and tradition of Bangladesh including the political philosophy of Father of the Nation Bangabandhu Sheikh Mujibur Rahman and his contributions to the creation of Bangladesh.