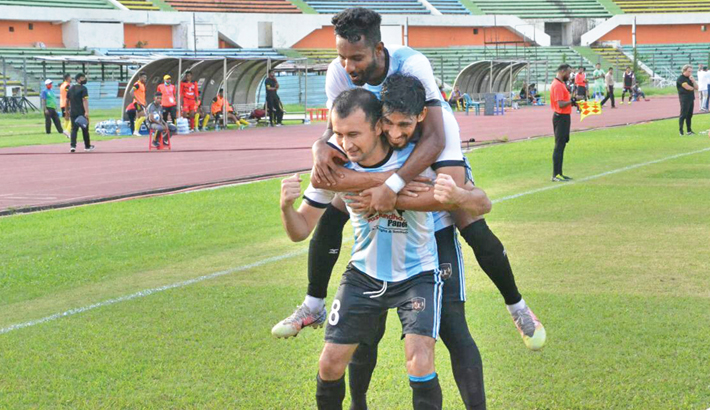 Sheikh Jamal, which started the match with aggressive football, created the first chance within 10 minutes of the first half.

Their attacking trio Otabek, Pa Omar and Sulayman Sillah continued their domination on Saif and created three more chances in the 16th, 19th, and 24th minutes.

Saif SC got a big blow when their defender Riyadul Hasan Rafi left the field with a serious head injury. He later received six stitches on his head.

Sheikh Jamal finally broke the deadlock just a few seconds before halftime in the (45+3) minute. Pa Omar put the ball home from a pass of Sillah (1-0).

Saif levelled the margin after they were awarded a penalty in the 54th minute.

Sheikh Jamal defender Monir Hossain touched the ball inside the box while trying to save a shot from Okoli and the Nigerian forward made no mistake and converted the spot-kick correctly (1-1).

Sheikh Jamal forward Otabek scored the match-winner from a direct free kick in the 76th minute (2-1) to give his team full three points from the match.