Kings one point away from WFL title 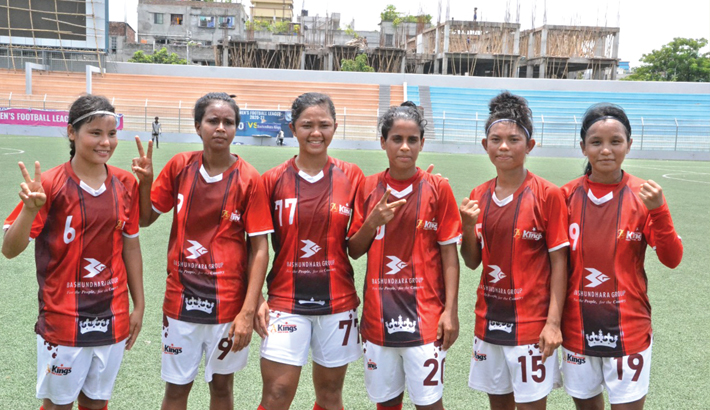 Bashundhara Kings players celebrate after winning against Cumilla United in their 12th match of the ongoing Women's Football League in Kamalapur on Thursday. – BFF photo

Reigning champions Bashundhara Kings clinched a massive 6-0 win over fourth-placed Cumilla United in their 12th match in Kamalapur on Thursday which left them one point away from defending the Women's Football League title.

Kings could have confirmed their title on the same day only if their nearest opponents Ataur Rahman Bhuyan College Sporting Club failed to secure a win against Jamalpur Kacharipara Akadas.

However, riding on two hat-tricks by Marzia and Eity Khatun, ARB CSC crushed Kacharipara Akados by 11-0 at the same venue.

Kings now secured all 36 points from 12 matches, maintaining their all-win record in the ongoing league.

ARB CSC, who earned 30 points from 12 matches, are six points behind Kings.

Kings will now have the chance to celebrate their successive league title on Saturday when they take on fifth-placed Jamalpur Kacharipara Akadas at the same venue.