Importance and significance of hajj 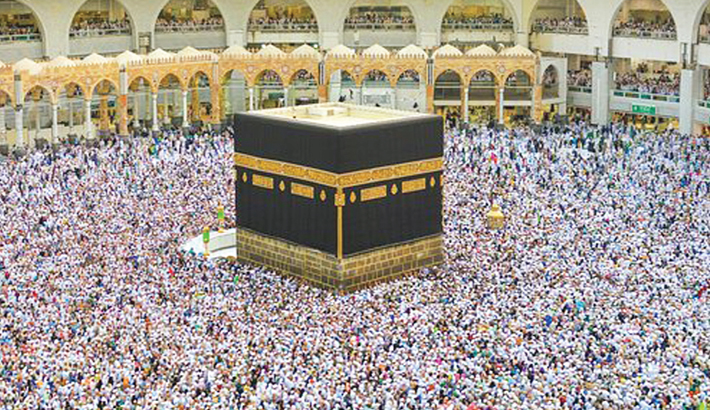 Hajj is one of the pillars and basic worship of Islam. It is obligatory on every well-to-do Muslim man and woman with knowledge and intelligence. It is of utmost importance in establishing spiritual progress, social harmony and world brotherhood. The role of hajj is also very important in building unity in the Muslim world. The right direction can also be obtained from the World Conference of Hajj on the do's and don'ts of the Muslim world.

Hajj is not just an act of worship, but an undeniable method of spiritual purification. The literal meaning of the word hajj is: “Ichcha” or “Sankalp” to take part in a journey, to intend, to visit, to intend, to go, to wish, to promise, to wish for any great deed. The technical meaning of hajj: Standing on the ground of Arafat in the state of Ihram with intention and circumambulation of Baitullah Sharif. Another says: Hajj is the pilgrimage to the Ka'bah by performing Ihram on the ninth of Jilhaj and performing certain rituals at certain places, including standing on the field of Arafat. It is a basic act of worship for Muslims. It is a special pillar of Islam what has been narrated in the hadith. The meaning is narrated from Hazrat Abdullah bin Umar Razi: He said: The Prophet (peace and blessings of Allaah be upon him) said: Islam is based on five things. These are: 1. There is no god, but Allah, and Muhammad (peace and blessings of Allah be upon him) and his slave and Messenger bear witness to this. 2. Establishing prayers. 3. Paying Zakat. 4. Hajj. 5. Fasting in the month of Ramadan. According to the history of hajj, it is known that about four and a half thousand years ago, Hazrat Ibrahim (a.d.) first introduced hajj at the command of Allah. He rebuilt the Kabaghar with it. The Kaaba was first built by Hazrat Adam (AS) with the help of angels. Built by Hazrat Ibrahim Jibraeel (AS) on the same foundation i.e. Hazrat Adam (AS) Rebuilt it at the site of the Kaaba. When the construction work was completed, Ibrahim (AS) was instructed to perform hajj.

Narrated from Hazrat Ibn Abbas (RA), ‘When Hazrat Ibrahim (AS) was ordered to declare hajj to be obligatory, he prayed to Allah, it is a desert without people. There is no one here to hear the announcement. How will my voice reach where there are dense settlements? He said, "Your duty is only to announce." It is my responsibility to reach out to the whole world. Hearing this, Hazrat Ibrahim (AS) then stood at Ibrahim in Makkah and announced. Allah exalts it. 'According to some narrations, he climbed Mount Abu Qubayes and announced. It is narrated that 'That call of Allah Ibrahim (AS) crossed the boundaries of the material world and reached the spiritual world, and the souls who responded to the call of Labbaik, Allah willing, they will gradually gather in the desert of Arafat till the Day of Resurrection!' This hajj is one of the most beautiful scenes of the great gathering of the world Muslim Ummah. Regarding the importance and significance of hajj in the Qur'an, Irshad further says, And, whoever enters it is secure.  Hajj is the duty of the Muslims who have the ability to perform it. And those who disbelieve (remember) Allah is not dependent on the world. 'Surah Ale Imran, verse 97. Again the same message has been echoed in the language of the Prophet (peace and blessings of Allaah be upon him). Narrated Abu Sa'id: The Messenger of Allah, may Allah bless him and grant him peace, said to us, "Allah has made hajj obligatory on you." So perform hajj. 'Muslim. The beloved Prophet further said about the virtues of Hajj, ‘A pure and acceptable hajj is better than the world and all things in the world. Nothing can be the reward for it except heaven. 'Another narration states,' A person who performs hajj for the sake of Allah's pleasure, does not have intercourse with her during hajj, or engages in any kind of sin, is a newborn child (at the end of Hajj). In fact, hajj is a special blessing given by Allah the Almighty.

Because of the Coronavirus epidemic, foreigners will not be able to perform hajj again. Only citizens and residents of the country will be able to take part in this hajj. However, the limit has been drawn. A maximum of 60,000 people will take part in hajj, according to a report of Reuters news agency that was published on June 12, 2021. The Bangladesh state minister for religion said, "Hajj pilgrims from outside Saudi Arabia will not be able to perform hajj this year due to the corona pandemic." Hajj will be performed on a limited scale with Saudi nationals and Muslims from other countries residing in Saudi Arabia. Last year, only a limited number of 1,000 Saudi nationals and foreigners were allowed to perform hajj. The date of hajj this year is July 19. Last year, for the first time in modern history, foreigners were not allowed to perform hajj due to the corona pandemic.

Hajj was not held a few times. Let us know from the pages of history when and for what reason, hajj was interrupted. The heartbreaking incident of Karbala took place in 63 AH. Yazid consolidated his power by assassinating Imam Husain. From the beginning of his rule, the sinful Yazid has been carrying out ruthless genocide in Makkah and Madinah Exactly ten years later, in 63 AH, or 693 AD, Hajjaj bin Yusuf laid siege to Baitullah on the orders of Caliph Abdul Malik bin Marwan. There of Hazrat Abu Bakr (ra) Abdullah bin Jobayer, the son of Hazrat Asma's grandson, went into hiding. He was a righteous disciple. He was ruthlessly killed for speaking the truth in front of the tyrant rulers. Not only that, Marwan demolished part of the Kaaba Sharif just because it was built by the oppressed Companion Hazrat Abdullah Ibn Zubayr (ra). They believed, ‘Hajj is a pattern of the Jahili era. Hajj is a lot like idol worship. 'Therefore, the Karamiya rulers became active in stopping the obligatory hajj of Islam. 317AH 930 AD was a painful history for the Muslims. The army led by Abu Taher Karamia, the ruler of Bahrain, attacked the convoy of pilgrims. Many men and women were killed and their property was looted. They created panic on their way to Mecca from Iraq and Syria. As a result, hajj activities were stopped for a total of 10 years from 317 AH to 327 AH.

Eminent Muslim scholar and historian Allama Imaduddin Ibn Al-Bidayah wan Nehaya writes that in 357 AH, a disease called Mashiri spread in Makkah in the form of an epidemic. At that time most of the pilgrims died of the disease. Some died of thirst on their way to Makkah. Many died on their way home after the hajj. Imam Ibn Jawzi (may Allah be pleased with him) wrote in Al-Muntaza that in 372 AH there was a conflict between the Abbasid Caliph and the Ubaidi rule in Egypt. As a result, no one in Iraq was able to perform hajj for a total of eight years from 372 to 380 AH. In 417 AH, it was not possible for anyone in Egypt and in the East to perform Hajj. In 430 AH, no one from Iraq, Khorasan, Syria and Egypt could perform hajj. Because, at this time the water of the Dajla river and other big rivers turned into ice. As a result, the movement of people became impossible. In 492 AH, there was a great conflict between the rulers of the Muslim world. This made the way to Makkah unsafe. That was five years before the Temple Mount in Palestine was occupied by the Christians. In 1038 AH 1629 AD, there was a massive flood in Makkah. Hajj and Umrah were not held during reconstruction of the Kaaba under the direction of Sultan Murad IV. As a result of the French invasion in 1213 AH, security became uncertain. As a result, hajj was also closed that year. In 1830, three-quarters of the pilgrims died of cholera. Apart from this, due to some other epidemics, the arrival of pilgrims in Makkah was stopped for a long time from 1837 to 1892 AD. Keeping the history of hajj in mind, we will move forward to attain nearness to Allah by performing all the activities of hajj. we shall assist other disabled, weak pilgrims in performing their activities. May Allah grant us Tawfiq. Amen.