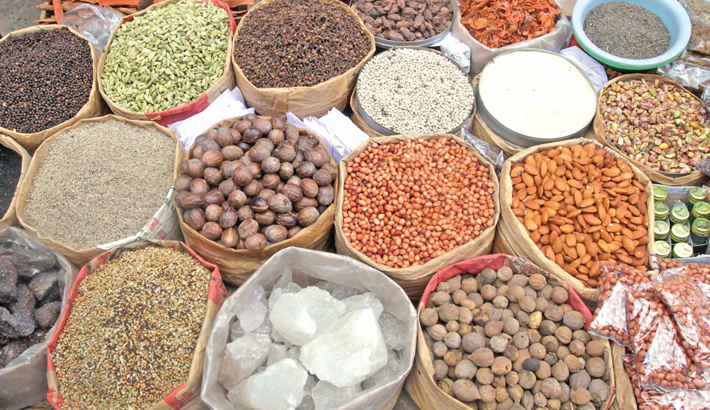 Prices of spices are skyrocketing ahead of Eid-ul-Azha, leaving more pressure on the wallets of the consumers.

Most of the spices used in meat recipes increased in the capital’s kitchen markets.

Most spices went up by 2% to 70% in a month as Eid is approaching, according to Trading Corporation of Bangladesh (TCB).

The price of ginger mostly used in cooking meat saw a sharp rise in the last couple of weeks.

Imported ginger price has increased by 13.3 percent in a week and 70 percent in a month in the country, according to the Trading Corporation of Bangladesh (TCB).

Cumin, another vital spice for meat recipe, saw a moderate surge in prices.

Its price was stable over the last two months, but went up from the beginning of July.

Imported garlic, one of the vital spices for meat recipe, rose by 11.54 percent in a week and 20.83 percent in a month, according to TCB.

Masud Alam, owner of Mahmud General Store at Kawranbazar, said price of ginger, cumin, garlic and some other spices prices have increased in the market as supply has run short due to lockdown.

Local turmeric price has increased by 29.41 percent in a month and was selling at Tk160-180 per kg on Wednesday.

The price of other essentials like cardamom, clove, cinnamon and lentil remained stable in the last one week.

Rabiul Alam, a consumer from Mohammadpur, said price hike of spices ahead of Eid-ul-Azha has affected them financially.

He said some dishonest traders have increased the prices of spices due to lack of surveillance in markets.