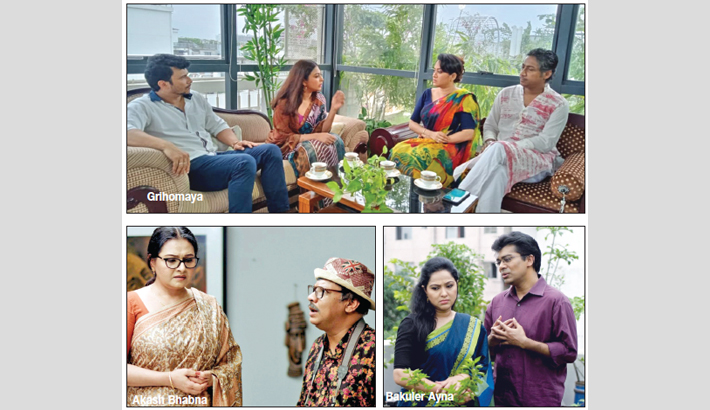 Bangladesh Television (BTV) will air an array of programmes during the Eid-ul-Azha festival to entertain the audience. The state-run channel has also produced five dramas made by noted scriptwriters and directors.

Among the dramas, ‘Akash Bhabna’ will be aired on the eve of Eid. Written and directed by Badrul Anam Saud, the play stars Intekhab Dinar, Bijori Barkatullah, Shahadat Hossain, Neelanjona Neela and others.

Written by Imdadul Haq Milan, ‘Biyer Koyekdin Agee’ will be telecast on the second day of Eid. Shajal Noor, Srabanno, Riad, Faqrul Bashar are the major cast of the drama.

Chayanika Chowdhury’s ‘Grihomaya’ will be aired on the third day of Eid. Tarin Jahan, Rownaq Hasan, Al-Mamun, FS Nayeem, Nabila and others will play roles in the play.

Starring Nadia Ahmed, Jitu Ahsan, Manosh Bandyopadhyay, the drama ‘Bakuler Ayna’ will be telecast on the fourth day of Eid. Pantho Shahriar has written the drama.

About the dramas, BTV’s Programme Manager Mahfuza Akter said, “On the occasion of Eid-ul-Azha we have selected five dramas based on contemporary stories. The plays have been made by five prominent scriptwriters and directors. I hope the audience will like the plays.”