Desperate search for oxygen in Myanmar amid corona crisis 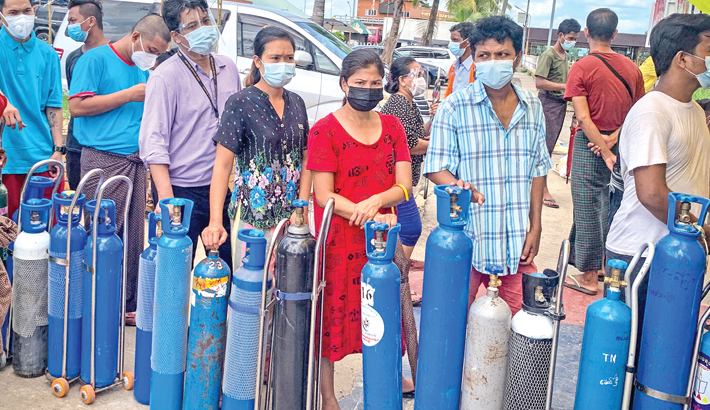 Myanmar people wait to fill empty oxygen canisters at a location donating oxygen at no cost in Yangon, amid a surge in the number of coronavirus cases. —AFP PHOTO

YANGON: Residents across Myanmar’s biggest city are defying a military curfew in a desperate search for oxygen to keep their loved ones breathing as a new coronavirus wave crashes over the coup-wracked country, reports AFP.

The spike in cases is the latest blow to Myanmar, already suffering from a February coup and a bloody crackdown on dissent that has killed over 900 people and gutted the economy.

Hundreds queued across Yangon as the sun rose Wednesday in the hope of refilling blue oxygen cylinders to take home to family members stricken with the virus.

Some had brought chairs and prepared for a long wait.

For others, it was too late.

“My sister was suffering from Covid-19 for three days,” Than Zaw Win, told AFP as he left one of the queues in the city of some 7 million. “In the first day, she was dizzy with low (blood) pressure... and she suffered a lot yesterday as she couldn’t breathe well.”

“But while I was queueing to fill oxygen this morning, my niece called me to go back home as my sister had died.”

Authorities logged over 7,000 new cases on Wednesday—compared with fewer than 50 per day in early May.

Millions in Yangon and the second city of Mandalay have been ordered to stay home, but the toll continues to rise and volunteer teams are stepping in to remove the bodies of victims from their neighbourhoods. Ye Kyaw Moe, a sailor, said he slipped out at 3am—half an hour before the lifting of a military-imposed curfew—to get a place in the oxygen line.

But when he arrived at a refill centre in Yangon there were already 14 others in front of him. “I haven’t slept for the whole night” he told AFP. “I also had to be careful to avoid the soldiers as we are still under martial law.” The State Administration Council—as the junta calls itself—says there is no need for alarm.

“Actually we have enough Oxygen,” ran the headline in Tuesday’s Global New Light of Myanmar, a state-backed newspaper. “The people do not need to worry about it so much and should not spread the rumour,” it quoted junta leader Min Aung Hlaing as saying.

But Than Zaw Win disagreed.

“She had no other diseases... There is no way my sister would have died if we had enough oxygen,” he said. Swathes of Myanmar were put under partial lockdown last year but enforcement was often lax in the developing nation, where many had to choose between following regulations and feeding their families.

The new wave comes with the country reeling from post-coup violence, and with many medical workers joining a nationwide civil disobedience campaign against the military. Infections are also seeping across Myanmar’s porous borders—last week a cluster in the border city of Ruili helped push China’s daily caseload to its highest in six months.

Of the 57 cases reported nationwide, 12 were Myanmar nationals in Ruili, authorities said.

Vaccine rollouts have also been slow—only around 1.75 million people have been vaccinated in the country of 54 million, according to the junta.

“The junta lacks the resources, the capabilities, and the legitimacy to bring this crisis under control,” UN Special Rapporteur on Myanmar Tom Andrews said Wednesday.

“The crisis... is particularly lethal because of the pervasive mistrust of the military junta.”

“Moving staff to where they can do the most good, moving aid to communities who need it, all becomes more challenging,” a spokesperson for the International Committee of the Red Cross in the country told AFP.

Myanmar is set to receive four million vaccine doses from China by the first week of August—too late for those fighting for breath.

At another queue in Yangon, Aung Kyaw was hoping to get more oxygen for his wife.

Unlike others, he said he cannot afford to travel across the city looking for refill centres where the queues are shorter.

“So I need to wait and queue here through rain or sun and the whole night too.”