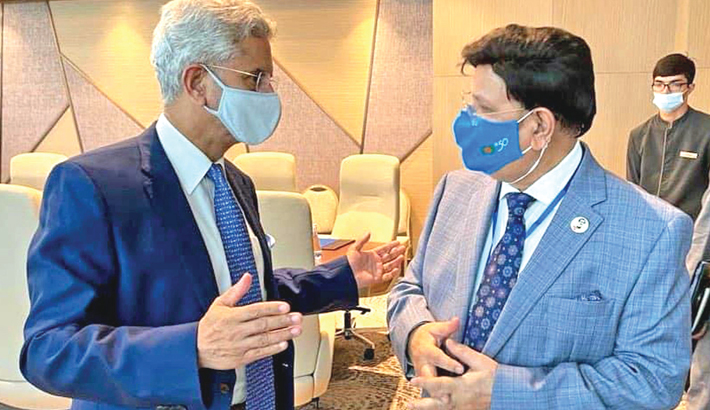 “Happy to meet Bangladesh Foreign Minister Dr AK Abdul Momen on the sidelines of  the Tashkent Connectivity Conference. A good opportunity to review the progress in our ties, including its connectivity aspects,” Jaishankar tweeted after the meeting.

Dr Momen will hold a meeting with the President of Uzbekistan during his stay there.

Dr Momen said he will discuss vaccine and Rohingya issues during his engagements in Tashkent. “Repatriation remains our number one priority. We’ll seek additional efforts.”

He said China will give 10 lakh doses of Sinopharm vaccine as a gift to Bangladesh and he will discuss vaccine issues during his meeting with the Chinese Foreign Minister. “This is also very good news.”

President of Uzbekistan Shavkat Mirziyoyev is hosting the two-day global forum to strengthen regional connectivity in the context of the new open foreign policy strategy of Tashkent.

The idea is aimed at further deepening economic cooperation in Central Asia, with access to South Asia, which has historically been closely linked to this region in economic, social, cultural and civilizational dimensions.

The Foreign Minister will return home on Monday (July 19) morning.

The conference is being attended by the President of Uzbekistan, the President of Afghanistan, foreign ministers and high-profile representatives of the central and south Asian countries, other foreign states, heads of authoritative international and regional organizations, global financial institutions and companies, leading research and analytical centres.

On July 16, the conference will start by the plenary session on Central and South Asia: Regional connectivity. During the meeting, Secretary-General of the United Nations António Guterres and the President of the Republic of Uzbekistan Shavkat Mirziyoyev, as well as the heads of state and government, and ministers of foreign affairs and international financial organizations will deliver their speeches.

The session will also consider the state of affairs and prospects of interregional cooperation in Central and South Asia, successful examples of cooperation, promising interconnected infrastructure projects.