Navy hands over 80 barracks in Hatiya 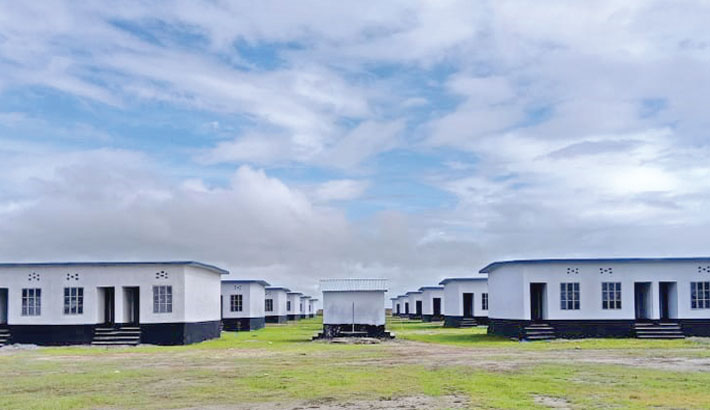 View of the newly-constructed 80 barracks meant for the homeless and disadvantaged people of Char Ghashia in Hatiya upazila of Noakhali under the Ashrayan-2 project. —ISPR photo

Bangladesh Navy has handed over 80 barracks constructed under the Ashrayan-2 project for the homeless people of Char Ghashia in Hatiya upazila of Noakhali district.

The barrack houses were officially handed over on Tuesday to Noakhali Deputy Commissioner’s Representative and Hatiya Upazila Nirbahi Officer Md Imran Hossain on behalf of the Bangladesh Navy. Navy representatives and local dignitaries were present on the occasion.

Bangladesh Navy built these barracks under the direct direction of Prime Minister Sheikh Hasina and with the overall supervision of the Armed Forces Division (AFD).

There are five units in each barracks. Each of the units will house one family. Each barracks has kitchen and bathroom facilities. A total of 400 homeless and disadvantaged families will get quality accommodation in those barracks.

Despite the coronavirus pandemic, Bangladesh Navy completed the project within the stipulated time by following health guidelines.

Mentionable, under Chattogram Naval Region Commander, the construction of another 60 barrack houses is underway as part of a project in Hatiya. Some 208 barrack houses are also being constructed under four projects in Sandwip upazila of Chattogram.