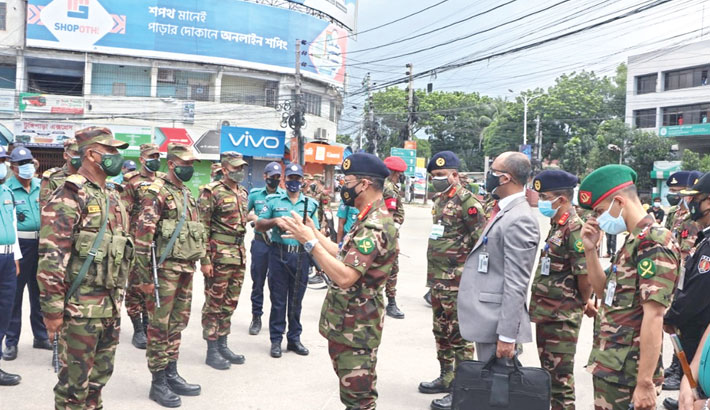 Chief of Army Staff General SM Shafiuddin Ahmed talks to the army personnel at a patrol activities programme of the army at Khulna Stadium on Tuesday. —ISPR PHOTO

Chief of Army Staff General SM Shafiuddin Ahmed inspected the patrol activities of the army against Covid-19 in Khulna district on Tuesday.

During the visit, he first witnessed the distribution of relief items among the distressed and helpless people by the 55th Infantry Division of Army at the Khulna Stadium.

He then witnessed the patrol activities of the army and spoke to the members of the army. He also exchanged views with the local administration and the general public.

Chief of Army Staff expressed satisfaction over the role and activities of the Army, local administration and law enforcement agencies in the second phase of the ongoing “Operation Covid Shield” in the district.

He called upon all to work unitedly to tackle the Corona epidemic by following the rules and regulations given by the government in the crisis situation.

After visiting Khulna city, the army chief went to Jashore cantonment and exchanged views with the Army officials.