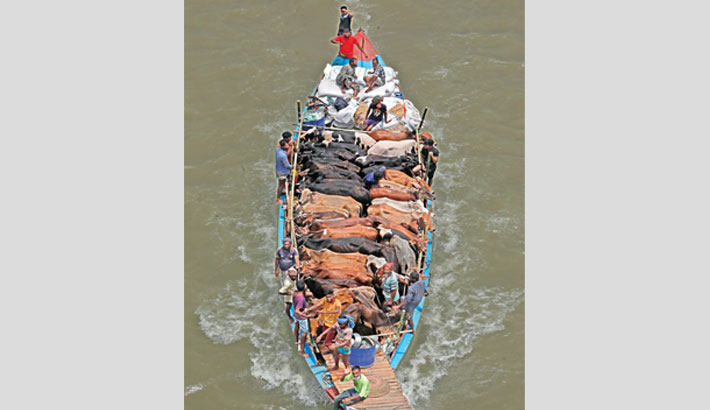 Traders are bringing sacrificial animals to the capital from different parts of the country for sale ahead of Eid-ul-Azha. The photo taken from Postogola bridge on Tuesday shows that a trawler carrying cattle heads towards the city. — Kamrul Islam Ratan

Sacrificial animals have started arriving in the city’s 19 cattle markets under two city corporations seven days ahead of Eid-ul-Azha.

A large number of cow, goat, sheep, camel, dumba and buffalo were seen in the capital’s cattle markets on Tuesday. Many buyers were also seen visiting the markets while some also bought cattle.

Traders from across the country started to arrive with their cattle in the city on Monday while the number of cattle traders has increased on Tuesday.

Traders said a large number of cattle will arrive after easing the lockdown from July 14.

“Buyers of sacrificial animals are now mostly visiting the markets to get an idea about cattle price,” said Hasim, a cattle trader at Mirpur Section-6 cattle market. He said though a small number of cattle are also being sold now, cattle trade will start in full swing from July 17.

Rajib, a cattle trader from Kushtia, brought 10 cattle at Mirpur Section-6 cattle market. He said buyers are now only visiting the market; sales will increase with Eid day approaching. He, however, sold two of his cattle on Tuesday.

Many people are also purchasing cattle from online platforms to avoid coronavirus contamination.

According to sources, more than 1.05 lakh cattle worth Tk 7.37 billion have been sold online since July 2.