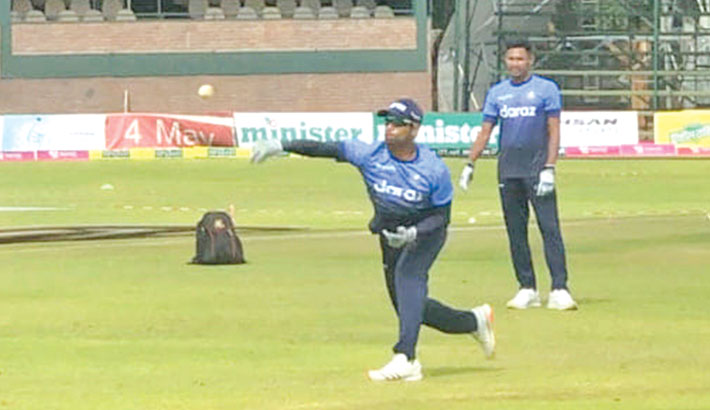 All eyes will be fixed on skipper Tamim Iqbal as he is expected to test his fitness condition by taking part in this game.

Tamim skipped the opening Test due to a knee injury and didn’t recover fully but the southpaw is adamant to take part in the practice game against Zimbabwe Select XI today.

It was learnt that he is expected to put up a tape on his knee as part of precaution while he wants to get accustomed to the tape due to the fact he will do the same if he features in the ODIs against the home team.

Tamim didn’t play in the Dhaka Premier League T20 Super League last month due to a knee injury while he went to Zimbabwe with pain.

He did not bat on the first day of the two-day warm-up match before the Test and while on the second day he spent half an hour on the wicket in the afternoon.

It is understood that his pain had increased again while trying to take a run on the way to that innings.

According to the BCB physician though he is not feeling any discomfort while batting it is not the case when he is running.

The ODI series is extremely important for Bangladesh since it is the part of ICC ODI Super League, which will determine the direct qualification of the teams for the 2023 World Cup in India. Winning all three matches against Zimbabwe became imperative for Bangladesh after they ruined 10 points against Sri Lanka at home despite winning the three-match series. For every win, a team will get 10 points.