Wildfires continue to scorch vast areas in US, Canada 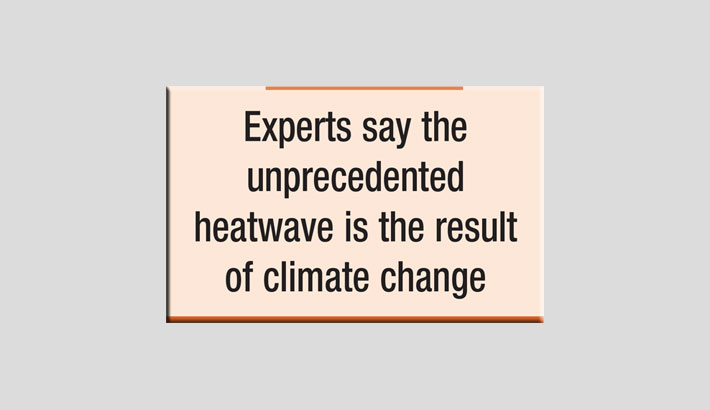 LOS ANGELES: Wildfires were burning across more than one million acres of the western United States and Canada on Monday, as scorching temperatures held their grip on areas reeling from a brutal weekend heat wave, reports AFP.

Some 850,000 acres were on fire in the United States—mainly in western states such as Oregon, California and Arizona—while more than 300,000 acres smoldered in Canada’s British Columbia alone, according to wildfire officials.

After a brief lull from late June’s previous heat wave, extreme temperatures in recent days reached as far inland as the edge of the Rocky Mountains—part of a dramatic trend that experts attribute directly to climate change.

The US National Weather Service (NWS) warned dangerous temperatures were continuing in the region for the early part of the week, with temperatures up to 116 degrees Fahrenheit (47 Celsius) recorded in southern California Monday, and a heat advisory issued for communities outside Los Angeles.

The NWS said overall temperatures were beginning to dip, with breezes arriving in northern California and storms in Arizona and New Mexico on Monday, but excessive heat warnings remained in effect “for most areas through Tuesday evening.”

Particularly high overnight temperatures have robbed many heat-struck regions of much-needed respite, and more sweltering forecasts lie in store for the coming days.

“Luckily the hot spots will start cooling down after today. Enjoy it while it lasts because we are looking at more heat starting this weekend,” tweeted the NWS Los Angeles service. Across the border, temperatures of around 98 degrees F—well above seasonal norms—were recorded Monday north of Vancouver in British Columbia, where some 300 wildfires were active across the Canadian province.

In California—where more than twice as many acres have burned this year compared to the same point in 2020’s record-breaking season—a large fire near Lake Tahoe expanded Monday, spurred by the heat, increased winds, low humidity and dry vegetation. A combination of two blazes sparked by lightning last week, the Beckwourth Complex fire, has rapidly grown to some 90,000 acres.

Large areas of forest have burned, with reports of homes destroyed in multiple towns and footage from the area showing burnt-out, abandoned cars and buildings.

As the state enters what are traditionally its most dangerous months for wildfires, evacuation orders were also issued for the River Fire, which began Sunday just south of the Yosemite National Park.

In the neighboring state of Oregon, the even larger Bootleg Fire more than tripled in size since Friday, reaching more than 150,000 acres and threatening power supplies to California. Two firefighters were killed in an aviation accident in Arizona.

The hot weather follows an earlier heat wave that struck the same regions at the end of June.

A study by a group of leading climate scientists found that those conditions would have been “virtually impossible” without human-caused climate change.

Last month was the hottest June on record in North America, according to data released by the European Union’s climate monitoring service.

The World Meteorological Organization and Britain’s Met Office said in May there was a 40 percent chance of the annual average global temperature temporarily surpassing 1.5 degrees above pre-industrial temperatures within the next five years.

The past six years, including 2020, have been the six warmest on record.