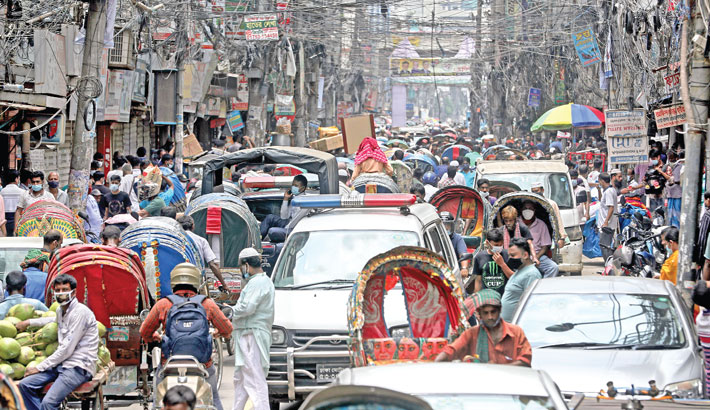 Despite the ongoing lockdown, movement of people and vehicles increases on most of the streets in the capital. The photo was taken from a street in Old Dhaka’s Nawabpur area on Monday. – Reaz Ahmed Sumon

The coronavirus situation continued to worsen in the country as highest single-day infections were recorded in the last 24 hours till Monday morning with the daily positivity rate crossing 31 percent.

During the period, record 13,768 coronavirus cases were detected in the country, taking the caseload to 1,034,957.

The daily positivity rate has risen to 31.24 percent from Sunday’s 29.67 percent while the overall infection rate stands at 14.75 percent.

Besides, 220 more people succumbed to the virus, pushing the national death tally to 16,639 with a case fatality rate of 1.61 percent.

The spike in the number of new cases came a day after Bangladesh saw the deadliest day of the coronavirus pandemic with 230 deaths and 11,874 infections registered on Sunday.

With this, the country has seen more than 100 single-day deaths from the virus for the last 16 consecutive days while the daily cases of over 8,000 for nine days in a row.

A total of 2,136 people died and 121,699 were infected with the virus across the country in July till Monday which is the highest compared to the same period of during the pandemic.

Highest corona deaths and infections were reported in Dhaka division in the last 24 hours, according to the Directorate General of Health Services (DGHS).

Of the 220 new deaths, 64 were registered in Dhaka division while 37 in Chattogram, 23 in Rajshahi, 55 in Khulna, 13 in Mymensingh, 18 in Rangpur, six in Sylhet and four in Barishal division.

Khulna and Dhaka divisions are now witnessing a sharp rise in both deaths and infections from coronavirus.

General and ICU bed occupancy has also been increasing day by day as many of the hospitals in the two divisions are overwhelmed with Covid-19 patients.

Locals and hospital sources said the coronavirus situation continued to worsen in several districts across the country, including Dhaka city, as a large number of patients are not taking corona test even though they have symptoms. Many patients are dying after being rushed to hospitals in a severe condition.

The DGHS said the bed occupancy has crossed the capacity in Kurmitola General Hospital in the capital and Chattogram Medical College Hospital.