90-year-old infected with ‘two virus variants at once’ 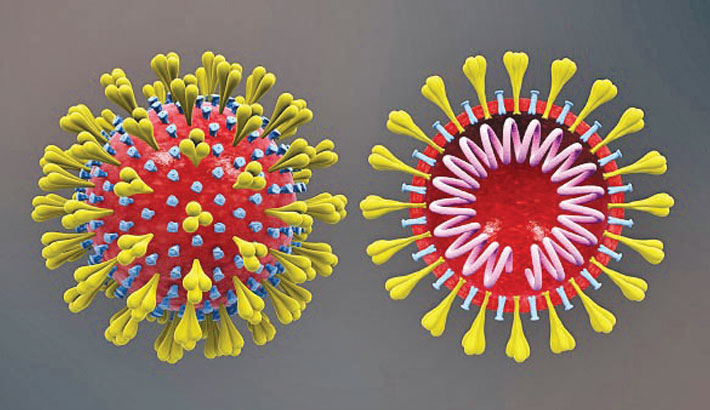 A 90-year-old woman who died after falling ill with Covid-19 was infected with both the Alpha and Beta variants of the coronavirus at the same time, researchers in Belgium said Sunday, adding that the rare phenomenon may be underestimated, reports AFP.

The unvaccinated woman, who lived alone and received at-home nursing care, was admitted to the OLV Hospital in the Belgian city of Aalst after a spate of falls in March and tested positive for Covid-19 the same day.

While her oxygen levels were initially good, her condition deteriorated rapidly and she died five days later.   When medical staff tested for the presence of any variants of concern they found that she was carrying both the Alpha strain, which originated in Britain, and the Beta variant first detected in South Africa.

“Both these variants were circulating in Belgium at the time, so it is likely that the lady was co-infected with different viruses from two different people,” said molecular biologist Anne Vankeerberghen from the OLV Hospital who led the research.

“Unfortunately, we don’t know how she became infected.”

Vankeerberghen said it was difficult to say whether the co-infection played a role in the fast deterioration of the patient.

The research, which has not yet been submitted to a medical journal for publication, is being presented at the European Congress of Clinical Microbiology & Infectious Diseases.

While Vankeerberghen said in a press release that there had been “no other published cases” of similar co-infections, she added that the “phenomenon is probably underestimated”.

This is because of limited testing for variants of concern, she said, calling for an increase in the use of fast PCR testing to detect known variant mutations.

In January, scientists in Brazil reported that two people had been simultaneously infected with two different strains of the coronavirus, but the study has yet to be published in a scientific journal.

In comments reacting to the research, Lawrence Young, a virologist and Professor of Molecular Oncology at the University of Warwick, said it was not a surprise to find an individual infected with more than one strain.

“This study does highlight the need for more studies to determine whether infection with multiple variants of concern affects the clinical course of Covid-19 and whether this in any way compromises the efficacy of vaccination,” he added.