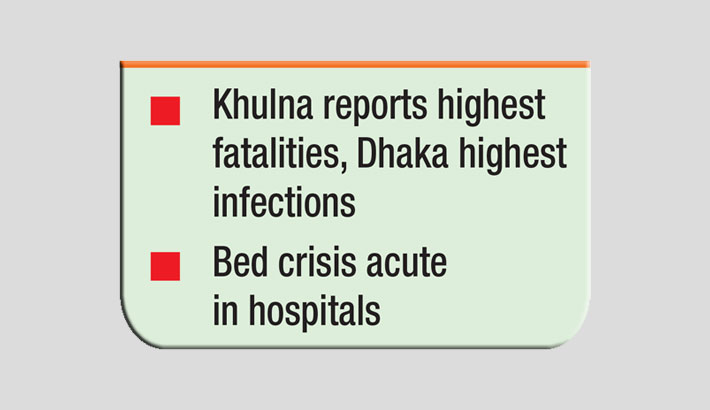 Coronavirus situation continues to worsen across the country as highest 230 deaths and 11,860 infections from the deadly pathogen were recorded in the last 24 hours till Sunday.

The Directorate General of Health Services (DGHS) said in a report that 230 more people have died of the virus and 11,860 cases detected in the last 24 hours till 8:00am.

Earlier, highest 212 deaths were reported on July 9 and highest 11,651 infections on July 8 in the country.

The country has seen more than hundred single-day deaths from the virus for the last 15 consecutive days while the daily detection of over 8,000 cases for the eight days in a row.

A total of 1,916 people died and 1,07931 infected with the virus across the country in nine days of July which is the highest compared to the same period during the pandemic.

Of the total 230 deaths, 56 were reported in Dhaka division, 39 in Chattogram, 26 in Rajshahi, 66 in Khulna, five in Mymensingh, 22 in Rangpur, eight in Sylhet and eight in Barishal division.

Around 6,362 corona patients have recovered in the last 24 hours, raising the total number of people recovered to 8,74,501 in the country till the day. The recovery rate has declined to 85.64 percent.

The DGHS said infection rate has also risen as 14.65 percent of the samples have been diagnosed with corona till the date while 29.67 percent samples diagnosed with the virus in a day.

The first corona case was detected in the country on March 8 last year while the first death from the virus was recorded on March 18 the same year.

General and ICU bed occupancy also has been increasing day by day as many of the hospitals in Dhaka and Khulna divisions have been flooded with Covid-19 patients, the sources added.

Locals said corona situation continues to worsen in several districts across the country, including Dhaka city as a large number of patients are not undergoing corona test even though they have symptoms. Many patients are dying after rushing to hospitals in severe condition.

Prof Dr Robed Amin, spokesperson for DGHS, in a health bulletin said corona cases and deaths has been increasing in such a way that if the situation continues for a week, there will have no empty beds in hospitals for corona patients.

“If we can’t control the current rising trend of corona infections, the situation may turn alarming and all of us will be under threat,” he warned.

Explaining reason behind rise in corona fatalities, the minister said a large number of corona patients of villages are delaying to rush to the hospitals despite having symptoms.