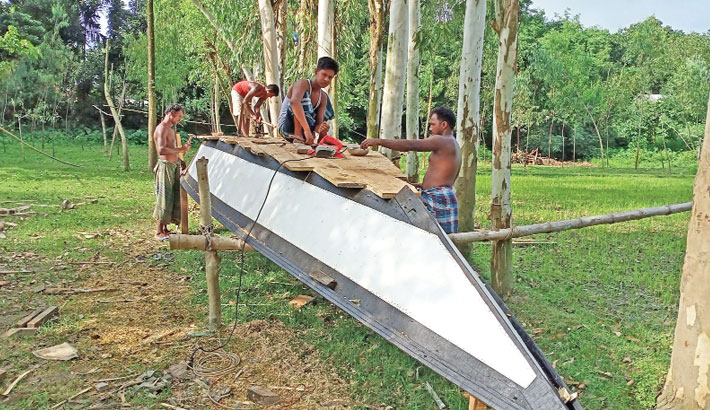 SHARIATPUR: Thirty families in Chandankar area of Sadar upazila are busy making boats which are widely used for commuting in rural areas during this season.

They have kept the boat-making craft alive through generations as it is a family profession for them.

The village is known as ‘boat village’ to others as the residents here earn their livelihoods by making and selling boats.

During monsoon, the demand for boats goes up as people living in low-lying areas and river banks use boats to get around due to the rise in water level in many rivers and frequent floods, reports UNB.

During a recent visit, this correspondent learned that the boat craftsmen are busy in making boats. People of different ages are involved in making boats. Some were seen cutting logs, some busy in nailing while some were busy in placing dice.

Talking to the workers, they said they need two days for making a small size boat while it needs three days for a big size boat.

“The price of wood is higher than previous year and that’s why Tk 6,000-8000 is needed for making a small-size boat and the buyers also struggled a lot to buy a boat due to the high price. The demand for small and medium size boats is high,” said a worker. Buyers from different parts of the district have thronged to the village to buy boats.

Sanjay Mandal, a craftsman, said “I have learned to make boats from my father and the demand for boats in the country lasts 3-4 months in a year and I make boats for four months in a year. After the season I ferry to different villages and do work as a carpenter. But in recent days I have struggled a lot to maintain my livelihood due to corona pandemic.”

Furti Mridha, another boat-maker, said “My grandfather and father used to make boats and I have learned how to make boats from them. Earlier, I had counted a profit of Tk 1000-1500 from a boat but now it’s too tough to pay the daily wages of workers. However, I have kept the business alive.”

Hridoy Boiragi, another craftsman, said “The price of iron rod and wood is high. Now I have to buy a rod at a cost of Tk 120-130 while it was 60-70 last year, which forces the boat price up.”

Anwar Hossain, a buyer said “The price of a boat is higher but I have to have one otherwise I have to stay confined in my house, meaning I shall fail to manage fodder for my cattle and goat. During monsoon, the whole area has gone under water and I have to manage hyacinth for my cattle.”

Harun Bepari, another customer, said “The ‘boat village’ is famous for its craftsmanship and the boat of the village is also popular for its sustainability. In the rainy season, we need boats to go from one place to another. But this year the price of the boats is higher than the previous year.”

Habibur Rahman, chairman of Rudrakor Union, said “The importance of boats is huge in the low-lying areas during monsoon. The residents of Chandankar village have long been involved with the craft but now many people have failed to maintain the business due to loss.”

He also stresses the need for the boat craftsmen to keep the profession alive during pandemic.