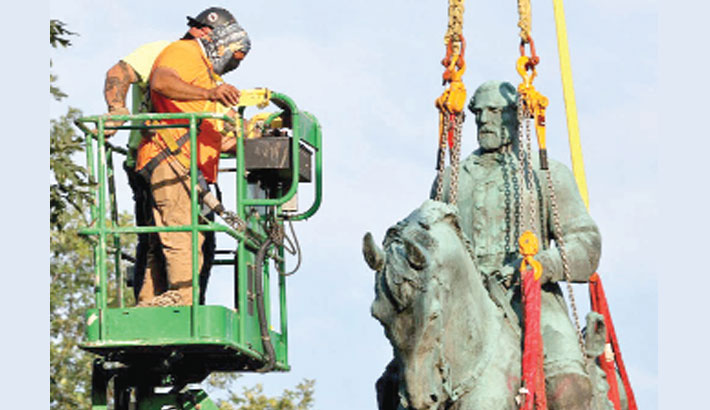 A statue of an American Confederate general at the centre of a violent rally in Charlottesville nearly four years ago is being taken down.

The statue of General Robert E Lee and another of General Thomas “Stonewall” Jackson will be put into storage, reports BBC. Plans to remove the Lee statue prompted a white nationalist rally in August 2017.

An anti-racism protester, Heather Heyer, was murdered by a neo-Nazi who drove into her at a counter-protest. Her killer was later sentenced to life in prison.  Memorials to the pro-slavery Confederacy - the southern states which revolted against the federal government during the US Civil War - have long stirred controversy.

Hundreds of statues of Lee, Jackson and other famous Confederate figures exist throughout the US.

Some see them as markers of US history and southern culture. But to others, they serve as an offensive reminder of America’s history of slavery and racial oppression.

The “Unite the Right” march held in Charlottesville, Virginia, was one of the largest such gatherings in decades, and drew hundreds of neo-Nazis, white nationalist and Ku Klux Klan members.

Dozens were injured in the violence that erupted between the marchers and counter-protesters. The events stunned the US and tensions were further inflamed by former President Donald Trump’s insistence that there was “blame on both sides”.

Charlottesville had continued to push for the removal of the Lee statue after the protests, but was prevented from acting by legal action and changes to the law.

Then in April, Virginia’s highest court ruled the statue could be taken down.

Charlottesville has set up viewing areas so people can gather to watch the statues come down early on Saturday morning. Take ‘Em Down CVille, a group which has campaigned for the statues’ removal, applauded news of the plans.

“No one believes that removing the statues will end white supremacy but this is an important step - and one long past due,” it said.

City officials say the statues will be held in a secure location until the council decides where to relocate them.

Local officials have said they plan to redesign the park spaces where the statues are located “in a way that promotes healing and that tells a more complete history of Charlottesville”.