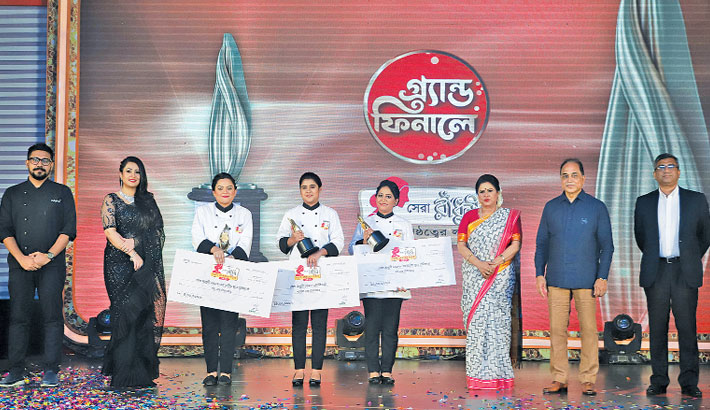 Winners of Shera Radhuni 1427 poses for a photo after receiving awards at a function in the capital recently.

Sadia Taher, a BBA student from Chattagram has become champion of this year’s Shera Radhuni

Square Food and Beverages Limited has announced the names of the winners of the 6th Shera Radhuni Competition recently.

Natasa also became first runner up and Nupur became second runner up of the competition.

After more than six months of competition, the winners were announced in the grand finale held at a hotel in the capital recently.

About 28 participants were selected from all over the country through divisional auditions.

All the 15 contestants and their families, the top contestants of the Shera Radhuni's previous iterations, country's best culinary experts and officials of various organisations of Square Group were present at the grand finale held in a limited capacity in accordance with the rules of hygiene.

As the winner, Sadia Taher got Tk 15 lakh, Nadia Natasa got Tk 10 lakh and Mariam Hossain Nupur got Tk 5 lakh.