Kishwar Chowdhury: A Paragon of Power

A 38-year-old Bangladeshi-Australian chef Kishwar Chowdhury is now a rising cooking star who has taken Bangladeshi cuisine to an international level by artistically and beautifully cooking the authentic Bangladeshi dishes along with many other international food items. Kishwar has been making headlines since she has claimed the position in the Top 10 list on MasterChef Australia. In fact, she is now the most celebrated contestant on the given reality show for being so unique. However, after knowing about her from different print and electronic media and also after watching her on the show, she appeared to me as a paragon of power. She is a woman who has turned out to be a symbol of empowerment and a source of inspiration for many women around the world who now will restore the positive energy to rise with their unique and individual identity.

Kishwar was born and brought up in Melbourne, Australia. Her father Kamrul Chowdhury was a freedom fighter who migrated to Australia about 50 years ago and then met her mother Laila Chowdhury who came from the West Bengal. Since her childhood, she has been exposed to the idea and art of cooking. Her mother made her sit beside her while cooking and encouraged her enthusiasm. She went fishing with her father. Her entire family grew different vegetables and ingredients at their garden yard. They had at least one Bangladeshi meal each day. Bangladeshi dishes have always been celebrated at her home.

Kishwar noticed that Bangladeshi food items are often under-represented even at the Bangladeshi food courts. Also, many people confuse between Bangladeshi food and Indian Bengali food. This is why she aimed at representing authentic Bangladeshi items like green mango broth, beet root and blood orange bhorta, jaubhaat, machherjhol, khashirrejala and many other mouthwatering Bangladeshi cuisine. Damn! She excites my taste buds every time I watch her serving these appetizing and flavorsome dishes. She adds flavors as if she sprinkles a pinch of delight in every bite. 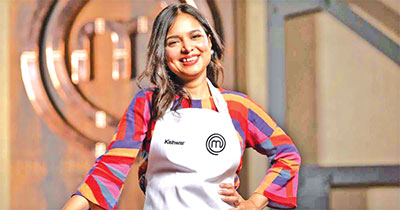 Her understanding of different ingredients and spices comes from the experiences that she has gained at home and also from her own multidimensional identity. Her father is from Bangladesh, mother from the West Bengal and she herself spent most of her life in Australia. Her wondrously supportive in-laws are based in Bangladesh. Kishwar’s frequent visit to Bangladesh and her family’s never-ending effort to uplift Bangladeshi food and culture have always made her celebrate her identity as a Bangladeshi woman. This is what the foreign-based diasporic people always have in mind that whether they can pass their legacy on to the next generations or not. They can if they get a support system like Kishwar has.

I always believe that a person cannot grow alone. Especially, in case of a woman, she needs and deserves the nourishment from the world around her. Kishwar’s uplifting shows how cordial, inspiring and nurturing her family and friends have been to her. Many aspiring female chefs want to show up and showcase their talents. The lack of positive reinforcement destroys their spirit to go further. They start, but cannot go all the day. The one-man army is a utopian idea. It takes a village to grow a child. And when a child receives positive affirmations since his or her childhood, she/he turns into a paragon of power who then motivates other dream-catchers.

Kishwar did her Bachelor’s in commerce and Postgraduate in Graphic Design, but her passion for cooking overruled all her academic degrees. She is, undoubtedly, highly educated. Nonetheless, to me, she is one of the most liberated souls who could listen to what her heart beats for and followed her passion accordingly. It is not that easy to bring a food item that represents an entire culture and country. It takes a lot of courage to represent an entire community. Kishwar, while serving Bangladeshi dishes, must have felt a tremendous pressure on her shoulder. When an individual represents the whole, he or she, by default, restores an ample amount of power and confidence.

In Simone de Beauvoir’s words, “cooking is more than penetrating and revealing the intimacy of substances. It reshapes and recreates them. In working the dough, she experiences power”. When Kishwar cooks, her hands and her eyes compose reveries and poetry. In beating the eggs and kneading the dough, she creates magic. When she cooks Bangladeshi dish, she pours her heart into it. When she cooks an authentic Italian pasta, she does it so delicately that it takes her to a sort of concealment. Who is she? What is she?

Kishwar Chowdhury was just an ordinary woman like many of us. She is a mother of two beautiful children. What makes her extra-ordinary is the journey she has made from her in-house kitchen to the MasterChef kitchen where she along with other chefs go through an adrenaline test and constant nerve-breaking moments. Her 12-year-old son motivated her to join MasterChef so that she could exhibit her talent. And she then takes cooking as a way to carry her culture. The way she verbally presents her dishes simply shows her profound love for and in-depth knowledge about her very own Bangladeshi food culture.

Indeed, food, like language, is a carrier of culture. When an authentic dish is lost, the culture related to it also goes extinct. Kishwar has always tried her best to sustain the authenticity of any food item by using her own style of cooking. It is a challenge for us to retain at least a few traditional food items and pass them on to the next generation. Kishwar also had this thought of getting her children know about their own cultural and traditional food. So, she continued to cook these items at home for her children. On an Instagram post, she wrote that her style of cooking is home food that nourishes the souls and there are no leftovers on her kids’ plates.

Kishwar is mainly a chef who has claimed one very important position in the Top 4 on MasterChef Australia. However, to me, she is more than a chef. She is the one who comes out from her comfort zone and followed her passion. And she nailed it! She is the one who proves that family and children are not obstacles but strength of a woman if she has the positive mind to face challenges. She is the one who proves that Bangladeshi dishes, just like Bangladeshi people, are unique. There was a debate on her identity. Indians claim her and so do Bangladeshis. I would like to say that Kishwar Chowdhury has beautifully diminished the fine borderlines and thus she now belongs to the world. She has already won plethora of accolades, thousands of admirations and millions of hearts. Let the MasterChef Australia competition go on, to us, Kishwar is the conqueror. Go Kishwar!