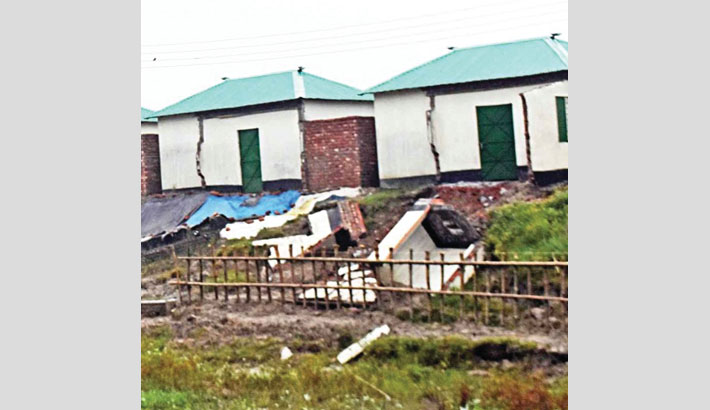 Prime Minister Sheikh Hasina has directed the authorities concerned to take stern action against those involved in the irregularities in the construction work of Ashrayan Project.

The anomalies have made the premier aggrieved as her government has undertaken the housing project for homeless and landless people across the country, said a source at the Prime Minister’s Office (PMO).

“Being aggrieved, the prime minister has wanted to know the names of those responsible for the irregularities and negligence of duty in the project work,” the source said.

Prime Minister’s Principal Secretary Dr Ahmad Kaikaus told the media that actions have already been taken against five officials of local administration after allegations of anomalies against them have been found true.

“The five officials responsible for the irregularities in the project have already been made Officer on Special Duty (OSD),” he said.

Many houses of Ashrayan Project, a dream initiative of Prime Minister Sheikh Hasina marking the Mujib Year, have turned into trashes due to the negligence of work in the project.

A good number of houses have been constructed on the low-lying khas land by using substandard construction materials.

Several people, living besides the newly-constructed houses, told the Daily Sun that they found cracks in the walls of houses and floor was collapsed due to the use of substandard construction materials.

People have alleged there may be internal enemies who want to destroy the pro-people initiative of Prime Minister Sheikh Hasina.

As per the construction plan, local administrations have to construct houses on khas land.

The height of each of the floors was supposed to be upper than the danger level of the floodwater in 1988. But the directive was violated.

Talking to the Daily Sun, several Upazila Nirbahi Officers (UNOs) alleged that the costs of the construction work are insufficient alongside faults in the design.

Most of the Khas land belongs to low-lying areas that have also been resulted in cracks on wall and floor collapse.

Mahbub said they don’t make UNO or AC (land) as target but all the members have to face the music if they are found involved in the irregularities and do negligence of duty.

During a recent visit, a PMO delegation has found irregularities and negligence of work in construction of houses for homeless people.

Stern action would be taken against some 180 persons, including 36 Union Parishad (UP) chairmen and administration officials, the sources say.

The ministry of public administration has made five admin officials, including UNO, assistant commissioner (land), Officer on Special Duty (OSD) on charges of irregularities in the Ashrayan Project.

Departmental cases have been filed against two admin officials and process is underway to file cases against other officials, while inquiry committees led by deputy commissioners of respective districts have been formed, ministry sources said.

The government built a total of 118,380 houses for the homeless people as a ‘Mujib Year gift’ of Prime Minister Sheikh Hasina.

About 70,000 landless and homeless families across the country got the houses along with pieces of land under the project in January.

Following the prime minister’s announcement that no one will remain homeless in the Mujib Year, the government made a list of over 885,000 homeless families and took the steps to change their lives.