Liton, Mahmudullah save the opening day for Tigers 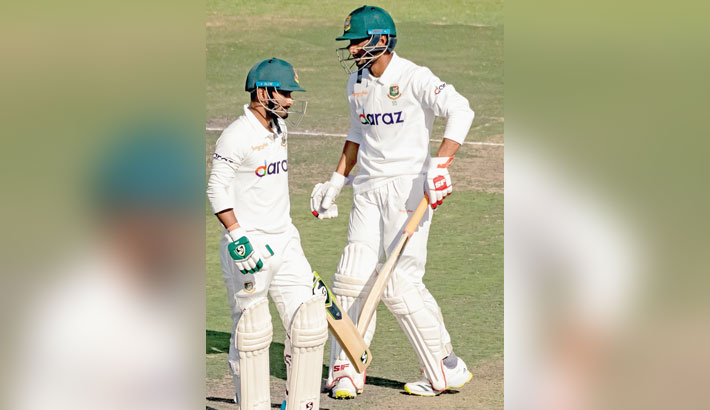 Liton Das missed out his maiden Test hundred by just five runs while Mominul Haque and Mahmudullah also struck fifties as Bangladesh made a decent comeback in the one-off Test series after a disastrous start against Zimbabwe on the opening day in Harare on Wednesday.

Bangladesh finished the day on 294-8 in 83 overs after Liton struck a splendid 95 off 147 balls while Mominul and Mahmudullah made 70 and 54 not out respectively after they opted to bat first at Harare Sports Club.

However, Zimbabwe pacer Blessing Muzarabani stole the opening day show as he claimed 3-48 while two other pacers Donald Tiripano and Victor Nyauchi gave him tremendous support by taking two wickets for the hosts.

Bangladesh, who played with eight genuine batsmen and only two pacers in the match, found them reduced at 132-6 only in the third hour of the game after Mominul, who earlier received two lifelines, was departed by Nyauchi.

Earlier, the Tigers, who had to play without Tamim Iqbal due to his knee injury, lost Saif Hassan (0) and Najmul Hossain (two) early in the innings after Muzarabani gave the hosts two initial successes.

Shadman Islam (23) too followed them soon after a 60-run stand with Mominul while Mushfiqur Rahim (11) and Test returnee Shakib Al Hasan (three) were both departed in quick succession to put Bangladesh in a difficult situation.

However, Mahmudullah, who made a Test comeback after 18 months, put up a 138-run stand with Liton in the seventh wicket to bring Bangladesh back in the match.

Liton failed to convert his ninth Test fifty into a maiden hundred as he got dismissed while trying to play a pull short of Tiripano while Mehidy Hasan was trapped in front in the immediate delivery.

Bangladesh didn’t lose any more wickets on the day after the umpires decided to call it a day due to the bad lights as Mahmudullah and Taskin Ahmed (13 not out) will resume their innings on the second day today.