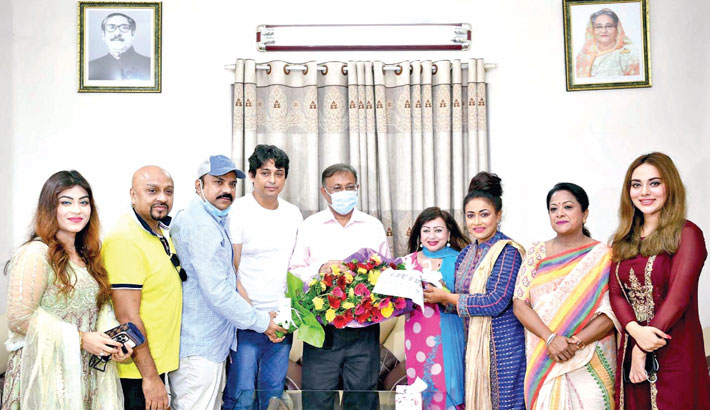 Members of the Bangladesh Film Artistes’ Association express their gratitude to Information and Broadcasting Minister Dr Hasan Mahmud by presenting him with a bouquet at his official residence in the capital on Tuesday for the passage of ‘The Bangladesh Film Artistes’ Welfare Trust Bill’. The bill was passed by the parliament on July 3. —PID photo

They also handed over a letter of appreciation to the Prime Minister Sheikh Hasina through the Information and Broadcasting Minister.

The Bangladesh Film Artistes' Welfare Trust Act, 2021 has been passed in parliament on July 3.

Hasan, in his speech, said the artistes of filmdom had a demand to form a welfare trust for long.

“No one met their demand. It is Bangabandhu’s daughter Prime Minister Sheikh Hasina pledged to meet their long felt demand and finally the act has been passed for the welfare of artistes,” he added.

He said the Premier always thinks about overall wellbeing of all artistes of the country. She at all times extended her cooperation to all, said Hasan, also Awami League joint general secretary.

The minister also extended thanks to the chairman of the Parliamentary Standing Committee on Information and Broadcasting Hasanul Haque Inu, other members of the committee and officials of the ministry.

He said the government has taken different initiatives for the development of film industry. The government has already formed a soft interest loan fund amounting to TK one crore for constructing and refurbishment of cinema halls across the country, he added.

Misha, Zayed and Aruna expressed their gratitude to the PM and the Information Minister for forming the welfare trust.

After the meeting, Information Minister replied to some queries of journalists and said a vested quarter with the patronisation and collusion of BNP and Jamaat is spreading rumours and falsehood against the country from abroad through social media and some web portals after being failed in combating the Premier and Awami League politically.