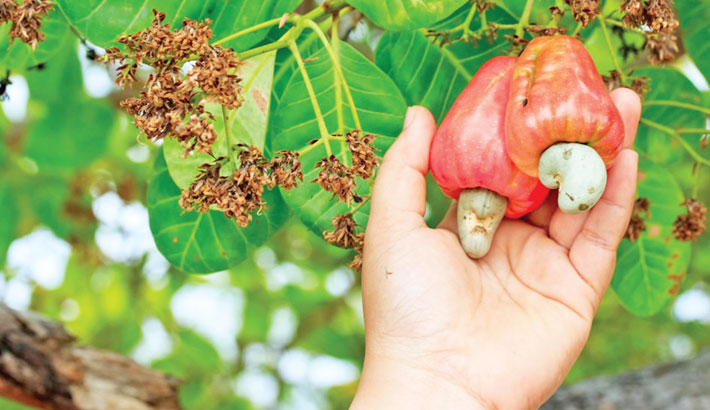 Present agri-friendly government has emphasised the various innovative agricultural technologies to make the country self-sufficient in food and transform agriculture into a more sustainable and commercial. As a result of the relentless work of the Ministry of Agriculture and related institutions, agricultural production is continuously increasing. Because of mechanisation, farmers across the country have been able to safely Boro harvest from the last two seasons.

The Ministry of Agriculture has taken effective steps to cultivate unconventional and high-value crops. One such potential, exportable, non-conventional and high-value crop is Cashew. Cashews are in great demand in the world market due to its abundant protein, various essential vitamins, minerals, medicinal properties and the demand is increasing day by day. Cashew is a tropical crop whose cultivation is limited to Asia and Africa. So the developed countries of the world depend on Asia and Africa for this nutritious agricultural product.

Cashew, currently, has an international market value of about 14.9 billion, with Vietnam alone exporting 4 billion worth of Cashew. Vietnam plans to export 10.5 billion worth of Cashew by 2030, but the history of Cashew cultivation in Vietnam is not very long. In the 1980s, the Vietnamese government encouraged landowners in some of the country's poorest districts to plant Cashew. By the 1990s, Cashew processing plants were established in Vietnam, and by 2013, Vietnam was supplying 25 per cent of the international market demand. Today, Vietnam alone controls 9 billion of the world's 14.9 billion Cashew trade.

The three hill districts – Bandarban, Rangamati and Khagrachari – in Bangladesh have a total area of 1,334,400 hectares, of which only 5% is plain cropland and the rest is a hilly area. At least 22 per cent of the land in the three hilly districts now has the opportunity to cultivate Cashew. Besides, the soil in other hilly areas of the country is also conducive to Cashew cultivation. In other words, if we can move forward with the right plan, we will not have to listen to the success story of Vietnam, but Bangladesh will be able to establish itself in the place of Vietnam in the near future.

In 1961-1962, the CHT Development Board and the Horticulture Development Department planted some Cashew saplings collected from Africa along with other fruit saplings in the hilly areas. But due to the lack of marketing and processing opportunities, many farmers cut down some trees. Later, the local wholesalers collected raw Cashew from the farmers and started exporting them to India and the local farmers became interested in Cashew again. On their own initiative, some farmers have come forward to cultivate Cashew again and within a few years, the trees have started yielding.

A few Cashew processing plants have already been set up in Bangladesh and the current production of domestic Cashew is not enough for these factories. It is now possible to earn a huge amount of foreign exchange by exporting processed cashews by collecting raw Cashew from different countries in Asia and Africa.

To increase the production of Cashew in the country and earn foreign currency by exporting them as commercial agricultural products, it is important to consider a number of factors such as:

1) The production capacity of conventional Cashew in Bangladesh is very low compared to the varieties of other countries, especially Vietnam and India. Shell Cashew of the varieties cultivated in the hilly areas of our country is small in size (3-4 g) and shell cashews are found in 4-5 kg per tree. Jargram-2 is the highest yielding variety in West Bengal, India yields 12-14 kg of shell cashews per plant and the average weight per shell is 8-10 grams. Vietnam cultivates five high-yielding Cashews, four of which yield much more than any other country. Names of these four varieties are SeedES04, SeedKP12, SeedKP11 and SeedBD01, whose shell cashew per plant is 45-65 kg. If arrangements are made to introduce these varieties from Vietnam, the production of Cashews will increase in the country at a significant rate.

2) It is also important to bring fallow lands in the hilly areas bordering Chittagong, Sylhet, Moulvibazar, Mymensingh, Sherpur, Panchagarh, Thakurgaon, Dinajpur, as well as in the red soil areas of Narsingdi, Gazipur, Tangail and Narayanganj under cashew cultivation.

3) Although a lot of Cashews are produced in African countries, there is no good processing industry. In this situation, it is easy to build a processing industry in our country as modern quality Cashew processing machinery is available in neighbouring India. In this case, it is necessary to encourage the private sector to establish Cashew industry by providing technical assistance including necessary land settlement.

There is a huge opportunity not only for the cultivation of Cashews in the country but also for the import of raw Cashews from abroad. The experienced policymakers of the Ministry of Agriculture, concerned departments and research institutes are working relentlessly to increase agricultural production as well as commercialisation of agriculture. It is very clear that Cashews will be considered as one of the export products of Bangladesh in the near future. At the same time, this tremendous progress in agriculture will continue and Bangladesh will further enrich and accelerate the country's economy by exporting various agricultural products.