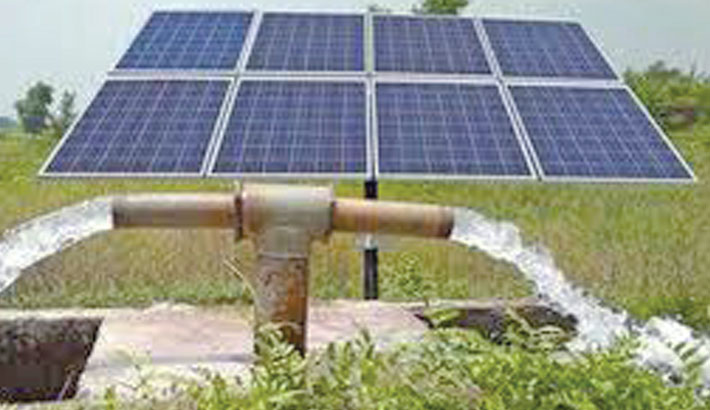 The use of solar power to run irrigation pumps is not new in the country. But a latest move offers something new and different to the farmers: sell your off-season idle electricity to the national grid and earn an income, too, reports UNB.

Bangladesh Rural Electrification Board (BREB) plans to install 2,000 solar irrigation pumps under the project allowing farmers to sell their unconsumed electricity to the national grid when irrigation is no longer required.

The solar power-run pumps will replace the existing conventional diesel-run machines in 21 districts under a pilot project, said officials at the BREB.

They said the BREB's move comes as part of the government's long-term aim to gradually replace the existing 1.34 million diesel-run irrigation pumps with solar across the country.

In the first phase of the project, the Cabinet Committee on Public Purchase has recently approved four separate tender proposals of the BREB to install 1,295 solar irrigation pumps at a cost of about Tk 157 crore.

"These pumps will be installed in the districts of Noagaon, Dinajpur, Thakurgaon, Gopalganj, Faridpur, Madaripur, Kumilla and Feni under different rural electricity cooperatives known as Palli Biduyt Samiti (PBS)", according to a BREB document.

BREB officials claimed that under the new system, solar electricity will have a better utilization by transmitting the off-irrigation power to the national grid.  "We have calculated that farmers normally use pumps for 115-120 days of a year for irrigation, while the rest of the year the pumps remain off when solar electricity has no use", said Shakil Ibn Sayeed, project director of the BREB.

"So, BREB will purchase this electricity from the farmers at bulk rate to ensure a better use of the unconsumed electricity", he told UNB.

BREB officials informed that though they will install the solar irrigation pumps at BREB's own cost under a hire-purchase arrangement, the farmers will finally be their owners by repaying in instalments over a 10-year period.

They said the BREB will bear 90 per cent of the cost and the farmers will only make 10 per cent down payment to own the solar irrigation pumps.

"BREB will provide 65 per cent as grants and remaining 35 per cent as loan ", said another BREB official adding that the distribution entity will build the required power transmission lines at its own cost to facilitate farmers' sale of the electricity to the national grid.

Stakeholders in the renewable energy sector welcome the initiative, but want a more comprehensive plan to ensure optimum utilization of the solar system and also the irrigation pumps' output under a national plan.

He said if there is a coordinated and comprehensive plan with a long-term vision, the project will be more effective and useful to ensure the best use of the solar system and water from the pumps.

"There should be a zone by zone plan for the project," he said, adding that each body should have their assessment of the total system.

The BREB will buy each unit of electricity a Tk 4.36, a bulk rate, applied in purchasing electricity from BPDB at the 11 kV level, they noted,

They added that if a farmer takes a system from BREB, it will not become an extra load on him to pay as he can pay in instalments from his earnings by selling electricity to the grid.

The BREB project director said that they are getting a huge response as 2400 farmers already applied for the irrigation pumps. But those, who can manage a clearance from upazila irrigation committee, will be eligible to get the pumps. Statistics from a draft report of Sustainable and Renewable Energy Development Authority (Sreda) on National Solar Energy Roadmap 2021-41 show that so far 1872 solar irrigation pumps were installed across the country by different organizations.