No BNP man found even for photo session: Hasan 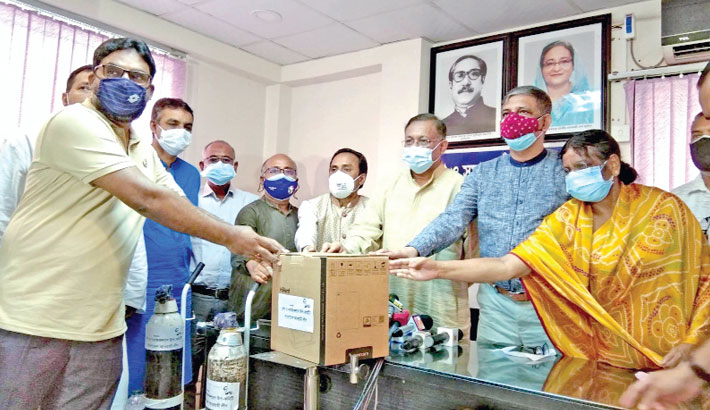 Information and Broadcasting Minister Dr Hasan Mahmud along with others hands over Covid-19 safety gears to representatives of different hospitals at a programme organised by Awami League’s Relief and Social Welfare Subcommittee at AL President Sheikh Hasina’s Dhanmondi political office in the capital on Sunday. — SUN PHOTO

Information and Broadcasting Minister Dr Hasan Mahmud on Sunday said leaders and activists of Bangladesh Nationalist Party (BNP) and its allies were not found even for photo session during the second wave of the Covid-19 pandemic.

“Some leaders and activists of BNP and its allies were seen in photo sessions during the first wave of the Covid-19 infections. However, BNP men and its allies remain absent even from taking photos during the second wave of the pandemic, let alone stand by the people. BNP leaders were not found even through binoculars all over the country,” he said.

AL’s Relief and Social Welfare Sub-Committee arranged the function to hand over Covid-19 safety gears to the representatives of different hospitals in districts and upazilas.

The minister said leaders and activists of Awami League stand by the people during the second wave like the first wave.

“Distributing protective gears among the people alongside food items, thousands of leaders and activists have been infected by the deadly bug,” he said.

The AL spokesperson said five central leaders of the party died of coronavirus while standing by people during the pandemic.

“Leaders and activists of the party have distributed relief items among over two crores of families during the first wave of the Covid-19,” he said.

“Some 1,000 leaders and activists died of this deadly bug. Over 125 AL lawmakers were infected with the coronavirus and some MPs died from the virus,” he added.

Mentioning that no political party stood beside the poor except AL, the minister alleged that no NGO or voluntary organisation has also been found during the second wave.

“They are cashing in on the pandemic for getting foreign fund using photos but they don’t have actual presence during the pandemic.  Even, they are continuing to make criticism of the government’s decision,” he said.

Pointing a finger at BNP Secretary General Mirza Fakhrul Islam Alamgair, Hasan said BNP leaders are busy with issue of Khaleda Zia’s treatment abroad but they don’t have a headache for common people.