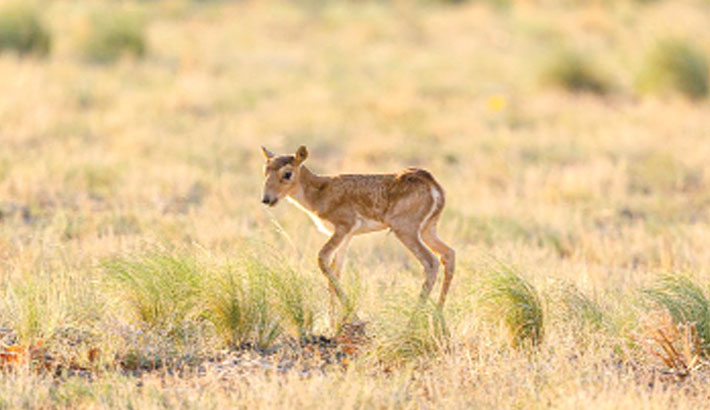 The population of a rare type of antelope has more than doubled since 2019, in a remarkable turn around in fortunes, reports BBC.

According to the first aerial survey in two years, the number of saiga in their Kazakhstan heartland has risen from 334,000 to 842,000.There were fears the animal was on the brink of extinction following a mass die-off in 2015. Distressing images of carcasses strewn over the steppes made world headlines. Following a series of conservation measures, including a government crackdown on poaching, and local and international conservation work, numbers have started to bounce back. That, together with the natural resilience of the species, gives hope for their future, said Albert Salemgareyev of the Association for the Conservation of Biodiversity of Kazakhstan (ACBK). “They give birth to twins every year, which gives high potential for the species to quickly recover,” he told BBC News.

The saiga has seen a dramatic turnaround in fortunes.

But even with the current boom, numbers will never return to the millions estimated in Soviet times due to looming threats, including the impact of state infrastructure projects and oil and gas development, said Albert Salemgareyev.

The latest survey, carried out in April, shows not only a big increase in the total numbers, but that one particular population in Ustyurt in the south of the country, has made a dramatic recovery.

The UK-based non-profit organisation, Fauna & Flora International, has been involved in efforts to protect the Ustyurt population by establishing a new anti-poaching ranger team and using satellite collaring to monitor saiga movements.

David Gill, FFI senior programme manager for Central Asia, said the new census was the best evidence yet that decades of conservation efforts to protect the saiga were paying off.

But he warned against complacency, saying saiga migrate across huge areas, so future development and infrastructure projects that might fragment its habitat remain a concern.

“But this new data is cause for celebration,” he added. “There are few truly vast wildernesses, like the steppes of central Asia, left on the planet. To know that saiga herds are still traversing them in their thousands, as they have done since prehistoric times, is an encouraging thought for those of us who want those wildernesses to remain.”

The International Union for Conservation of Nature classes the saiga among five critically endangered antelope species.

Numbers of the species, which goes by the scientific name Saiga tatarica, have plunged by more than 90% in the late 20th Century, coming close to extinction several times.

Kazakhstan is home to a majority of the world’s saiga, although the antelope also can be found in southern Russia and Uzbekistan.

In the decade after Kazakhstan’s independence the animal was pushed to the brink through poaching for its horns, which are prized in Chinese medicine.

Recent years have seen measures taken by the Kazakh government to protect the saiga population, including a crack down on poaching, with penalties of up to 12 years in prison, and the establishment of nature reserves.

Stephanie Ward, Altyn Dala conservation initiative international coordinator at the Frankfurt Zoological Society, said the antelope is among very few living creatures to have run freely among both Neanderthal humans and the humans of the 21st Century.

“It’s exciting to see their numbers start to recover to levels nearing 1,000,000 individuals, and it speaks volumes about the Government of Kazakhstan’s commitment to their protection,” she said.

The die-off of 2015 was blamed on a bacterium previously present in the saiga which turned into a deadly killer due to excess humidity and higher-than-average daily temperatures on the steppes.