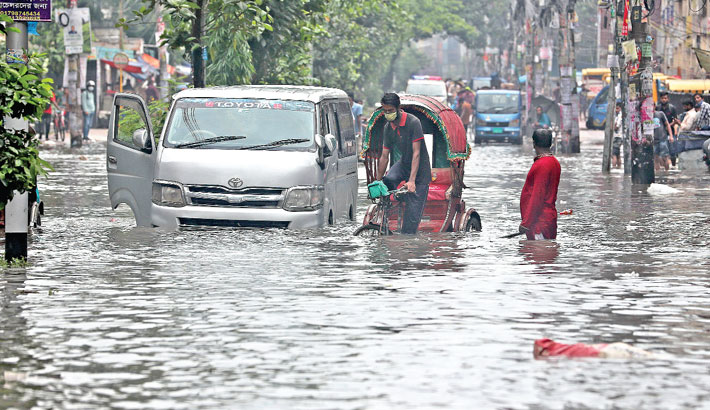 Overnight rain has inundated many parts of the capital, causing sufferings for commuters. The photo was taken from Green Road on Sunday. Reaz Ahmed Sumon

Residents of many areas in the capital suffered all day long due to  waterlogging after heavy downpour on Sunday morning.

City residents, particularly those who went outside for attending offices, providing emergency services and purchasing essentials at kitchen markets, suffered on alleyways and roads due to ankle-to-waist-deep water.

They also alleged that rainwater entered houses, markets and other establishments in different areas in the capital.

Besides, members of law enforcement agencies, rickshaw-pullers and passersby suffered a lot due to the unrelenting rain since the morning.

Talking to the Daily Sun, Arif Hossain, a meteorologist of Bangladesh Meteorological Department, said that they recorded 41mm rain from 6:00am to 12:00pm, in six hours, in Dhaka while one mm rain was recorded from 12:00pm to 6:00pm.

Jahidul Islam, a resident of Sobhanbag in Dhanmondi, said residents of their area and nearby areas have to deal with ankle-to-waist-deep water since the morning.

“I go out for some emergency purchase for my family but the road in front of my house goes under water. People of the area who have to go to kitchen market, pharmacy and other places have suffered a lot. Even, the rickshaw-pullers are not interested in wading through the waterlogged road,” he said.

Business owners of Karwan Bazar said the rain in the morning caused a great a suffering for them as the market went under ankle-deep water.

They also alleged that their goods were damaged in the rainwater.

Abdur Rahim a vegetable trader, said, “We could not sit at Karwan Bazar today because all the area went under ankle-deep water. There was no situation for buying and selling. We have told the authorities many times that after a little rain the area goes under water.”

Easin Rana, a resident of Ainusbag Road of Dakkhin Khan, said that residents of his area suffered a lot due to the rain in the morning.

“Rainwater mixing with the waste water of drains enters different houses and shops. Commuters have to go to market for buying essentials sloshing through the putrid water. It is unbearable for us because we have to face the situation after a little rain every day,” Easin said.

Residents of Dhanmondi 27 area and Lalmatia said they had to deal with knee-deep water while leaving the houses, and had the worst experience in the year due to the waterlogging.

Talking to the Daily Sun, DNCC Mayor Atiqul Islam said they need time to resolve the waterlogging problem from Dhaka because of the volume of the task.