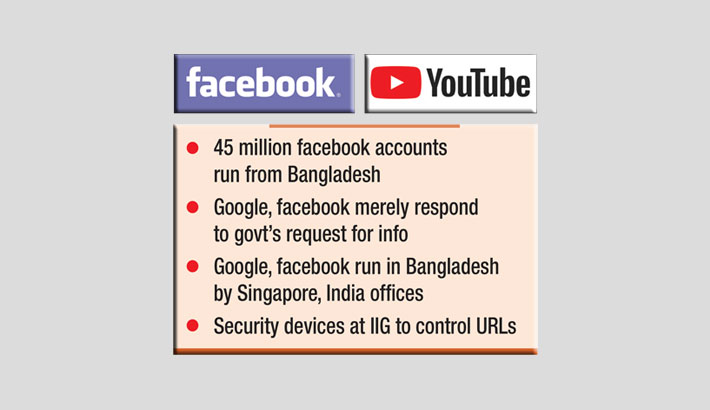 Despite the installation of security devices to filter internet links of social media and other sites, the government authorities apppear to be turning a blind eye to the continued posting of malicious contents on virtual space.

Internet service providers and technology experts said the government has the capacity to downgrade any internet link being used to be circulated as hateful posts.

But, the authorities have lapsed into silence despite the spreading of such contents, they added.

“The government can block links of profiles and pages of social media. But the local regulator can’t filter contents without cooperation from foreign agencies.  If any country wants to block any link, it can do that through International Internet Gateway,” Arif Nezami, chief executive officer at Prenuer Lab, a tech agency which works with Facebook and Google, told the Daily Sun.

At present, over 100 million people in Bangladesh are connected with the internet. Of which, some 50 million signed up with different social media platforms while 45 million facebook users dominate the surface.

Besides this, every smart phone has a preinstalled app of YouTube, the video streaming service from tech giant Google.

Experts say the government has been continuously pushing the foreign companies to remove different posts instead of securing the national internet.

If the government wants to stop any link inside the country, it can easily be done using the IIG and local cache server of facebook and google, they opine.

The Department of Telecom (DoT) has already installed security devices at 25 IIG connecting points to strengthen control over the national internet, a chief executive of an IIG company told the Daily Sun, requesting not to be named.

The official said the telecom regulator (BTRC) has the authority to run or remove any URL (Universal Resource Locator) of any website from national internet through the DoT devices on IIG-end.

“If anyone posts malicious contents on the internet, it can be removed instantly from IIG,” said the official.

Against the backdrop of this, the government has been saying that the social media giants merely respond to the request following the public privacy policy.

“We send reports to Facebook, Google regularly when we get any complaint from law enforcement agencies as there is no capacity to remove any content from these platforms from here. However, we can downlink the specific URL inside the country,” he told the Daily Sun.

The minister’s comment also reflects the comment of technology experts. According to sector insiders, most of the popular internet giants like Google, Facebook run cache server in partnership with local IIG and ISPs to run respective services with special speed.

Cache is a special storage space for temporary files that makes a device, browser, or app run faster and more efficiently.

Recently, the government has taken an initiative to take control over the URL of websites to filter the contents on cyber space as foreign companies merely respond to the government request.

Bangladesh Telecommunications Regulatory Commission (BTRC) has recently directed ISPs and IIGs to withdraw the cache servers from local resellers at a district level for the sake of national interests, sources said.

Internet companies have set up local cache servers on demand from the ISPs to smooth the surfing of the internet as the connectivity dominates by three of four players – Youtube from Google and Facebook platforms.

The move came amid widespread criticism from different quarters that the responsible government offices fail to downgrade the URLs used to disseminate anti-state propagandas, including fabricated stories on the Prime Minister, ministers and other dignitaries.

Bangladesh Association of Software and Information Services (Basis) former President Fahim Mashroor said the government can’t regulate contents of social media platforms as none of these are not registered with local laws like the Company Act.

“Although the government does not have the capacity to remove any social media content, it can only control the traffic of respective internet links,” he told the Daily Sun.

Bangladesh has been asking top tech companies like Google, Facebook and Microsoft to set up local offices for a long time.

Responding to the call, Microsoft has set up its office in Dhaka while Facebook and Google have been running their operations in Bangladesh from regional headquarters in Singapore and country offices in India.