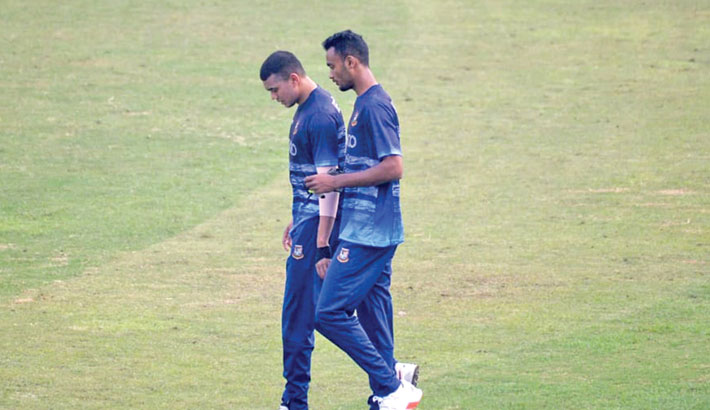 Whether Bangladesh’s pace bowlers failed to bowl with fire in the two-day practice match against Zimbabwe Select XI or were that a team plan to just contain the opponent batsmen and put pressure to make a platform for the spinners to exploit is unknown but one thing is certain the pacers never looked threatening with the new ball.

The tourists’ pace bowlers hogged all the spotlight leading up to the one-off Test series considering their performance is expected to be a deciding factor as traditionally in Zimbabwe slow bowlers are expected to get lesser help from the surface compared to the pacers.

There was nothing in the wicket for the pace bowlers in the warm-up game and furthermore, the tourists’ pace bowlers hardly had anything special that was good enough to dominate over the batsmen of the opposition camp.

Bangladesh pace unit members of the Test squad- Taskin Ahmed, Ebadat Hossain, Shariful Islam and Abu Jayed --- will be making their debut in Zimbabwe as the tourists are travelling over there for the first time since 2013.

All the four pace bowlers played in the practice game basically tried to maintain their line and length but as they lacked swing as well as express pace deliveries that hardly looked to trouble the hosts as none was good enough to keep the batsmen guessing.

On the contrary, ace all-rounder Shakib Al Hasan seemed to be putting all the pressure on the host by varying his pace along with line and length but more importantly, he guided the other spinners from the slips that looked to have made a huge impact considering he is the only one around with the experience of bowling in Zimbabwe.

Taskin and Shariful looked determined to follow the same route that they travelled during the two-match Test tour in Sri Lanka earlier this year while Abu Jayed, considered as a Test specialist and best among the lot in red ball, hardly bowled too many overs.

Certainly judging the pace bowlers with the performance in the practice game is not ideal but along the way they didn’t bowl with huge conviction and according to former national pace bowler Robiul Islam coming up with a proper plan of action and that too by controlling the excitement will be key of the fast bowlers if they want to earn success as losing all their gas too quickly will lead them nowhere.

Robiul was Bangladesh’s last pace bowler to deliver a match-winning performance as he was a player of the series against Zimbabwe during the Tigers' last tour in 2013.

“It is ideal to start with the good length here, but if the wicket reacts in favour of the pace bowlers and if it has bounced on it, then it’s recommended to bowl at the up from thereon. Bowling at the up doesn't mean half-volley, as it should be just a little forward of the good length. If the wicket produces both bounce and swing in a game, then to me, this should be the ideal approach to bowl in this condition,” Robiul told The Daily Sun when asked about what is his prescription for pace bowlers who are touring Zimbabwe for the first time.

“The first thing of the bowlers should do is not get excited by getting an assist from the wicket because they have to understand the nature of the wicket and bowl according to its merit and if you try to give everything too quickly by seeing that there is pace and bounce it will hardly be beneficial considering you will be losing all your gas too soon and this area needs to be addressed as we seem to get very excited too early,” he said.

Whether the tourists’ pace unit opt for a more aggressive strategy in the Test match remains to be seen but one thing looks sure with this mindset and approach they won’t be dictating in terms of the lone Test, scheduled at Harare Sports Club from Wednesday.