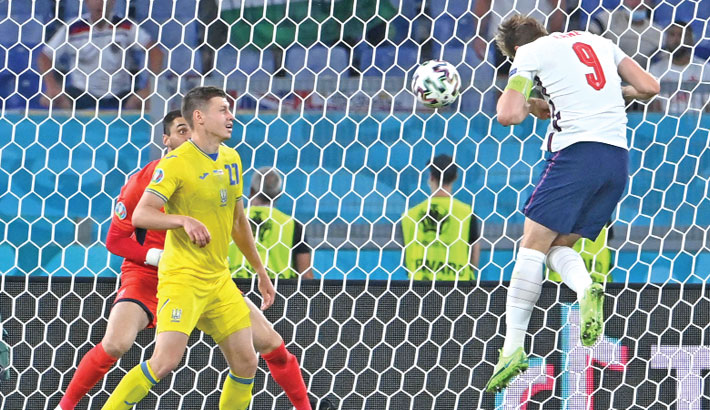 England forward Harry Kane (right) heads the ball to score the third goal for the team during their UEFA EURO 2020 quarter-final match against Ukraine at Olympic Stadium in Rome on Saturday. — AFP PHOTO

England crushed Ukraine 4-0 in Rome on Saturday to set up a Euro 2020 semi-final against Denmark who continued their remarkable run by beating the Czech Republic in the last eight earlier.

Harry Kane scored twice for England at the Stadio Olimpico while Harry Maguire and Jordan Henderson also found the net as Gareth Southgate's side reached the semi-finals of a second consecutive major tournament.

Now they are a step closer to claiming a first major international title since the 1966 World Cup and, with the remaining games in the tournament being played at Wembley, they are favourites to claim the trophy. 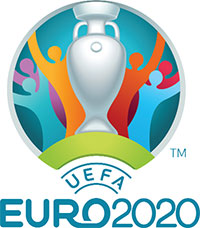 Kane put England ahead inside four minutes and although Ukraine finished the first half strongly, Maguire headed in the second goal from a Luke Shaw free-kick within a minute of the second half starting. Kane scored again with another header, his third goal in two games coming from a Shaw cross, and Henderson came off the bench to head in his first England goal on his 62nd cap.

"We didn't want to take a backwards step. We really wanted to grasp an opportunity. I thought the players were decisive and ruthless all night," said Southgate as England followed their 2-0 last-16 win over Germany with their biggest victory in a major tournament knockout game. They have still not conceded a goal after five games at this European Championship and were certainly not affected by leaving Wembley, where they had played all their matches so far at the tournament, to come to Rome.

"To be able to lead out a team at any game at Wembley is special, to have a semi-final is extra special," said Southgate.

The Danes continued their remarkable run since the trauma of Christian Eriksen's cardiac arrest in their opening defeat by Finland as they beat the Czech Republic 2-1.

They are into the last four of a major tournament for the first time since winning the European Championship in 1992 after first-half goals from Thomas Delaney and Kasper Dolberg in Baku. A defeat by Belgium followed the Finland game, but they have now scored 10 goals in three straight wins since then.

Denmark made a dream start in Azerbaijan as Delaney headed home Jens Stryger Larsen's corner in the fifth minute.

They doubled their advantage three minutes before half-time as Dolberg volleyed in Joakim Maehle's magnificent cross.

The Czechs pulled one back in the 49th minute when Patrik Schick tucked Vladimir Coufal's cross into the bottom corner to grab his fifth goal of the tournament and move alongside Cristiano Ronaldo at the top of the scoring charts. But Schick was substituted after suffering a muscle strain with 11 minutes remaining and Denmark held on.

Meanwhile UEFA said it was investigating an incident which saw stewards confiscate a rainbow-coloured flag from a Danish fan ahead of the game.

"UEFA never instructed stewards in Baku -- or in any other stadium -- to confiscate rainbow flags," European football's governing body said in a statement to AFP.