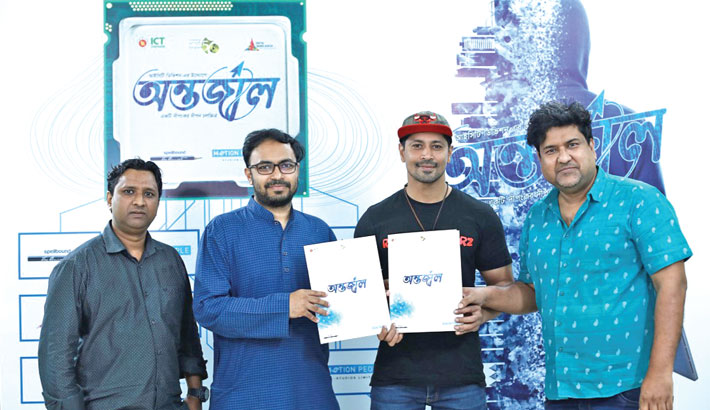 Actor ABM Sumon with director Dipankar Dipon and others

Actor ABM Sumon, who earned huge positive response for his role in Dipankar Dipon’s action genre film ‘Dhaka Attack’, has joined the cast of same director’s new film ‘Antarjal’. He has also signed an agreement with the film’s production house Motion People’s Studio recently at its office recently. Producer Sadekur Arifin and co-producer Shah Amir Khosru, among others, were present on the occasion.

ABM Sumon will be seen as a cyber-crime official at CID, FinTech. Actor Siam Ahmed will play the lead role while Bidya Sinha Mim will play the role of an IT foreign graduate in the film. National Film award winning actor Sunehra Binte Kamal will also be seen acting in an important role in the movie.

Antarjal is a Cyber Crime Action Thriller genre movie to be made in Bangladesh. Directed by Dipankar Dipan, Saifullah Riyad has written wrote the screenplay of the movie based on the story of Dipankar Dipan.

The story of the film is that a global hacker group deletes all data on the servers of a commercial bank in Bangladesh. They demand to hand over three young people of the country to them. The country’s communication system shuts down to increase the pressure on the government. The responsibility of normalising the situation hands over to CIRT and CID. Then three youths kidnapped on the way while being sent to hackers.

Siam Ahmed will play as Lumin, a young computer programmer based in Rajshahi.