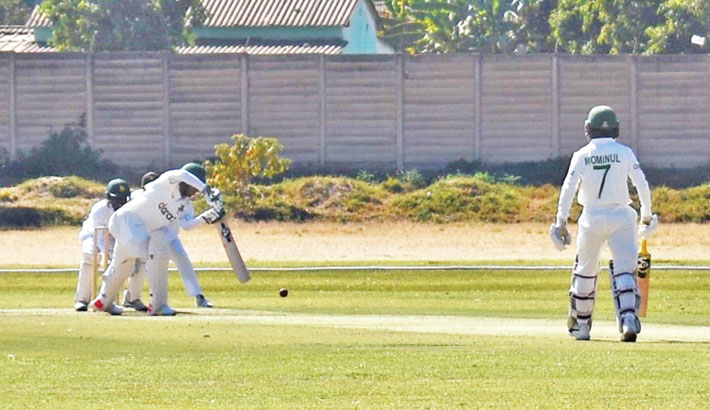 Bangladeshi batters had a successful outing on the opening day of their two-day practice match against Zimbabwe Select XI as they ended the day on 313-2 in 90 overs at Takashinga Sports Club in Harare on Saturday.

Shakib Al Hasan, Saif Hassan and Najmul Hossain made the best use of the practice match as they scored 74 off 56 balls, 65 off 108 balls and 52 off 107 balls respectively before retiring while other batters except for opener Shadman Islam (0) also spent a decent amount of time in the middle without losing their wickets.

Bangladesh team management opted to play without Tamim Iqbal and Mushfiqur Rahim in the practice match as both of them have been suffering from respective injury problems.

Although both the batters took part in the practice sessions on the previous two days, the team management had to be cautious with them as they were trying to get them in the one-off Test series, starting on July 7 at Harare Sports Club.

Mahmudullah, who was recalled to the Test team as a backup of those players, made unbeaten 40 off 71 balls to prove that he still has the potential to play in the red-ball cricket.

Bangladesh cricketers couldn’t take an ideal preparation for the Test series considering they came into the series on the back of playing T20 cricket.

The series is considered to be a dress rehearsal for the next ICC Test Championship and as things stand Test cricketers of Bangladesh will have to adapt with the start-stop-start preparation scheme of things.

Before the beginning of the series, Bangladesh selectors emphasized getting into the Test groove as quickly as possible and the Tigers surely made them optimistic through their first-day performance in the practice game.

Zimbabwe fielded at least eight cricketers from their 20-member Test squad for the Test series during the two-day practice match but pacer Charlton Tshuma, who couldn’t get a place in the Test squad, was the most impressive bowler on the day, conceding only 13 runs from 14 overs with eight maidens and no wicket.