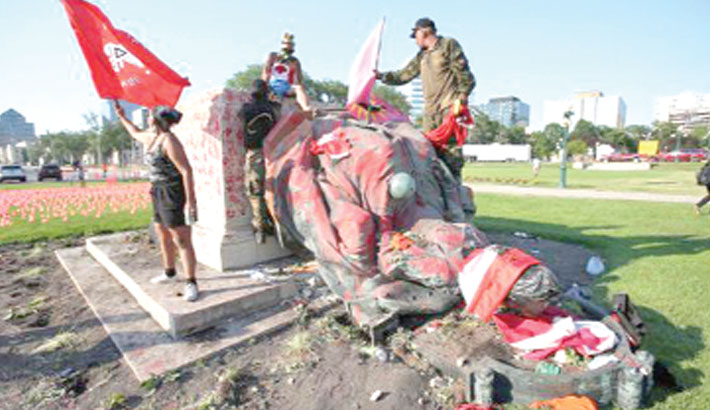 A prominent statue of Queen Victoria has been torn down by protesters in Canada as anger grows over the deaths of indigenous children at residential schools, reports BBC.

The protesters cheered as the statue at the legislature in Manitoba’s capital Winnipeg was toppled on Thursday. A smaller statue of Queen Elizabeth II was also upended nearby. Local media say police used a stun gun to arrest a man at the scene but the protest was largely peaceful. The toppling of the statues came on Canada Day, an annual celebration on 1 July that marks the country’s founding by British colonies in 1867. The recent discoveries of unmarked indigenous Canadian graves at residential schools had prompted calls for national celebrations to be called off.

The British government condemned the toppling of the two statues. “We obviously condemn any defacing of statues of the Queen,” a spokesman said.

An estimated 6,000 children died while attending these schools. Students were often housed in poorly built, poorly heated and unsanitary facilities.

Municipalities across Canada cancelled celebrations and statues of figures involved with residential schools have been vandalised or removed.

In Winnipeg, thousands took to the streets to honour victims of residential schools and rally support for indigenous communities.

A group of protesters had marched on the Manitoba Legislature as part of a demonstration against the deaths of indigenous Canadian children at residential schools.

Monarch of the UK, Canada and other territories from 1837 until her death in 1901, Queen Victoria was on the throne during the founding of the Canadian confederation. The British Crown negotiated treaties with indigenous First Nations in Canada and the government enacted its residential schools policy during her reign.

At the protest in Winnipeg, the statue of Queen Victoria was daubed in red paint while a sign saying “we were children” was left nearby.

A survivor of a residential school, Belinda Vandenbroeck, told Canadian broadcaster CBC she felt no remorse about the toppling of the statue, which she had had no part in.

“She [Queen Victoria] means nothing to me except that her policies and her colonialism is what is dictating us right to this minute as you and I speak,” Ms Vandenbroeck said.

Symbols of empire, colonialism and slavery have been targeted by protesters at demonstrations against racial injustice across the globe in the past year. Those demonstrations exploded worldwide following the death of African-American man George Floyd in May 2020.

Last year, several prominent statues of Confederate leaders and slave owners were torn down and vandalised in the US, generating heated debate about monuments.

Similar scenes were seen in the UK, where Black Lives Matter demonstrators tore down a statue of slave trader Edward Colston and threw it into a harbour during a protest in the city of Bristol.