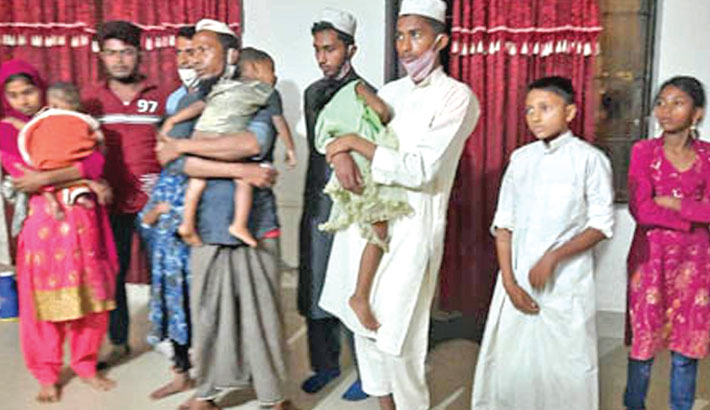 Moulvibazar police detained a group of Rohingya people including woman and children, who escaped from Kutupalong and Balusali Rohingya camps in Ukhia, from a bus stand in Kodalipur area of Moulvibazar district town. — Sun Photo

MOULVIBAZAR: Police have arrested a group of 14 Rohingya people who escaped with family from the Rohingya Camps in Cox’s Bazar.

Moulvibazar model police station Officer-in-Charge informed that they are being sent back to Kutupalong and Balusali Rohingya camps through Ukhia police station.

Officer-in-Charge (OC) of Moulvibazar model police station Yasinul Haque said out of the 14 detainees, 7 were adult males, 1 was a female, 2 were minors, 3 were teenagers and 2 were children under 1 year of age.

During preliminary interrogation, the detainees told police that they had escaped from the Rohingya camp and reached Moulvibazar by road four days ago via Chattogram.

On Friday night, they were wandering at the bus stand in Kodalipur area of the city on their way to Sylhet. The police bring them to the police station for interrogation and confirmed their identities.

However, no evidence was found againist them were involved in any crime. The process of sending them back to the Rohingya camp is underway, OC added.