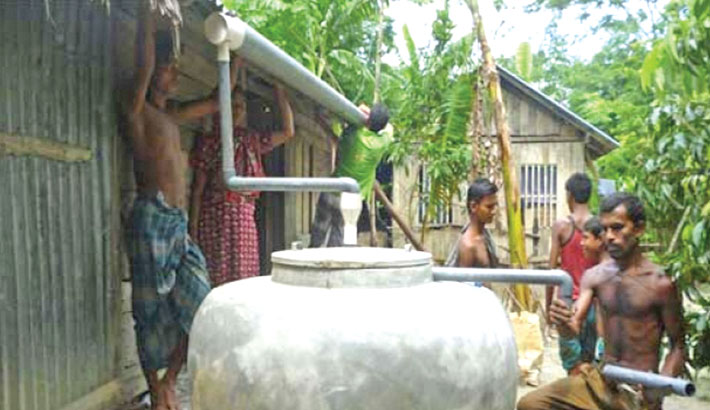 RAJSHAHI: Rainwater harvesting can be the vital means of mitigating water crises in the Barind area that would be easing living and livelihood conditions of people, particularly marginalised and less-incoming groups of the area.

Time has come to extend necessary knowledge and devices to the communities to make them capable to seize the opportunities of rainwater harvesting technologies.

Niamul Bari, professor of the Department of Civil Engineering in Rajshahi University of Engineering and Technology (RUET), said rainwater harvesting might be a potential alternative way of mitigating the households' level water crises, particularly during the dry season, reports BSS.

He added that there are scopes of storing rainwater during the monsoon if the community people were equipped with infrastructures necessary for the purpose.

In the high Barind tract comprising some parts of Rajshahi, Chapainawabganj and Naogaon districts, many people, especially the ethnic minority and other marginalized ones, face water crisis that pose a serious threat to their livelihood when the water sources become ineffective during the dry season due to gradual falling off the groundwater level.

Prof Bari said some of the households have started getting benefits from their rainwater harvesting venture in the water-stressed area for a couple of years.

Sharing her experience in using rainwater, housewife Hazera Begum, 37, a resident of Parbatipur village under Gomostapur upazila in Chapainawabganj district, said her six-member family is now dependent on tank water during monsoon.

"We collect rainwater from the rooftop through a pipe and conserve it in a concrete reserved tank," she went on saying.

Begum added rainwater is very much suitable and effective for cooking rice and pulses and other household works.

Mikhail Saren, 42, another resident of Sundarpur Kakonhat village under Godagari upazila in Rajshahi district, has been using rainwater for his household purposes over the last five years.

"I store rainwater and use it," said Mikhail, while talking to BSS Thursday.

He referred to a process of collecting and conserving rainwater, saying rainwater is abundantly available in the rainy season which is the best time to collect it.

He said during the rainy season, he installs containers for storing water. "This water makes our life easy, meeting our necessary water demand for household works and also for five cattle heads".

Like Hazera Begum and Mikhail Saren, around 20,000 villagers have become happy after using rainwater for their household purposes.

Ataur Rahman, chairman of Badhair Union Parishad (UP), said the villagers got financial support from the Integrated Water Resource Management (IWRM) Project for installing the infrastructures to collect and conserve rainwater.

In the drought-prone Barind area, rainwater accumulation and conservation methods are very effective during monsoon, he said.

Household-level rainwater harvesting ventures has become a boon for many of the households in the area, said Abdul Matin, chairman of Panchandar UP, adding that his area is the worst-affected by rainless condition every year.

DASCOH Foundation and Swiss Red Cross are jointly implementing the IWRM project in drought affected 42 union Parishads and three Pourasabhas under eight upazilas of Rajshahi, Naogaon and Chapainawabganj districts since 2015.

Swiss Agency for Development and Cooperation-SDC is extending financial support for implementing the project, said Jahangir Alam Khan, coordinator of the IWRM Project, adding that the villagers collect and use more than 6.12 crore litres of rainwater through the 1,260 households level installations every year.

The villagers in water scarce areas like High Barind Tract (HBT) can use rainwater in their daily activities, he said.

He continued that the amount of rainfall in HBT is less, just around 1000-1200 mm per year compared to the national figure of 2,500 mm. This area is characterised by delayed arrival of seasonal rain and early withdrawal.

“The Barind area is drought prone and it also experiences less rainfall. So people use groundwater in an extensive way, putting a huge pressure on it. In this regard, rainwater can be the best alternative source of water,” Jahangi Khan further said.