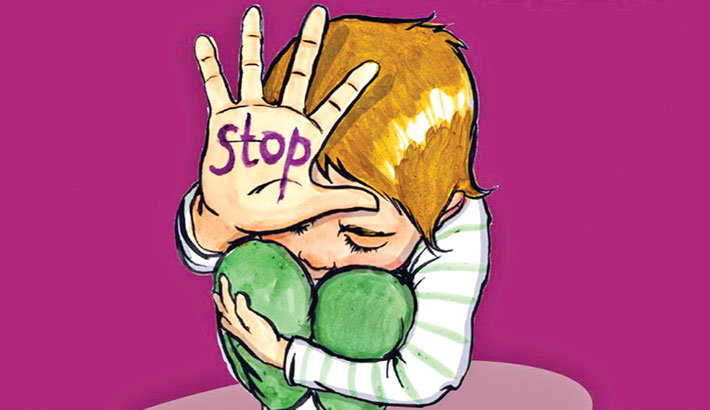 Hundreds of thousands of children around the country have been experiencing increasing threats to their safety and wellbeing, including mistreatment, gender-based violence, exploitation, social exclusion, and separation from caregivers since the outbreak of the COVID-19 pandemic. Quarantine approaches such as school closures and movement restrictions, while considered necessary, are disrupting children's routines and support systems. By the way, stigma related to COVID-19 has left many children more vulnerable to abuse, violence, and psychosocial distress.

In Bangladesh, a good number of children become victims of child labour and trafficking. Many children are also deprived of basic human rights at home, workplaces, educational institutions and other public places due to various reasons. The nature and context of abuse as well as violence against children irrespective of age, sex and class have been increasing day by day.

For conceptual clarification, child abuse commonly happens when a parent or caregiver causes injury, death, emotional harm, or risk of serious harm to a child. Ignoring children’s needs, putting them in unsupervised dangerous situations, exposing them to sexual situations, and making them feel worthless, or stupid are also major forms of child abuse. Regardless of the types of abuse, in most cases, it leads to serious physical and psychological harms which surely lasts longer. Therefore, no matter when the abuse has occurred, whether in the past or it is ongoing, children always need help and support.

In general, the following four main types of abuse are classified:

Physical abuse: It simply denotes any use of physical force against a child that doesn’t happen by accident and causes injury. Hitting, beating, punching, biting, burning, scratching, and choking a child are addressed as physical abuse.

Sexual abuse: Any form of sexual involvement or contact between a child and an adult. Sexual abuse can be voyeurism (spying on or watching a child), sexual acts, and incest (sex between family members).

Emotional abuse: This is commonly a pattern of denying a child love, approval and security, or mistreating a child in the way an adult speaks to them or acts towards them. Bullying, yelling, isolating, criticising, terrorising, ignoring, and shaming are considered emotional abuse.

Neglect: Failing to provide children with the things they need to grow and for better blooming such as safe shelter, adequate food, close supervision, medical care, education and safety are conceptualised as neglect.

Maltreatment and violence against children have severe negative consequences on the children, communities, and nations. Sometimes, it provokes death and severe injuries to the victims. Exposure to violence and physical as well as humiliating punishment at an early age can hinder the development of the brain and nervous system of children. Victims may feel self-blaming. They may possess intense forms of anger towards the abusers for a long time. It can also induce the fear of getting close to or trusting other people. Children who experienced abuse and violation might have sadness, acute agony, confusion and low self-esteem. Child abuse, sometimes drives victims to a mentally challenging situation and traumatisation. Trouble at school with learning new things and lack of proper socialisation may appear as great social barriers. Feeling of loneliness and social isolation are the next pitfalls.

In the cases of facing abuse and violence, children should talk to someone they trust most. It might be a teacher, physician, counselor, psychologist, psychiatrist, police officer or family member. Children must remember that to become a victim is not their fault. They have to learn about the concept of child abuse, its causes, and its effects. They might talk to other persons who have already experienced child abuse earlier. They should meet other survivors too who know how a first-time victim feels and what he or she needs as the first aid approach.

An integral effort is highly needed to build awareness about child abuse among community people, in all spheres of life, from family to educational institutions. Emphasis should be given to existing family values and positive parenting methods. Parents should have a keen look at their children’s mental age and the process of their mental growth. We should contribute to developing children’s skills to protect themselves from abuse. We must work for making abuse and violence against children socially unacceptable. Special concern has to be afforded to children living with disabilities, from ethnic or religious minority groups, refugee-hosting regions, disaster-prone, and other hard-to-reach areas.

In partnership with child rights organisations, we have to remain engaged in advocacy to repeal existing laws that allow physical punishment and enact a new law banning physical and humiliating punishment in all settings. The capacity of parents, teachers and service providers have to be enhanced to facilitate non-violent interactions with children. The laws for protecting children are not yet fully implemented or standardised. In case of abuse, services to children often lack quality and equity. Sexual abuse cases are hard to assess. On the other hand, justice is inhibited by stigma and fear of risks. Therefore, we have to deal with child abuse and violence in a combined and integrated approach.

Today’s children are ultimately the future of our country. Hence, let us ensure proper measures for their safer and better living. To prepare a world full of safety and betterment for children is a shared responsibility from all quarters. We hope for such a secured abode for children in the days ahead.