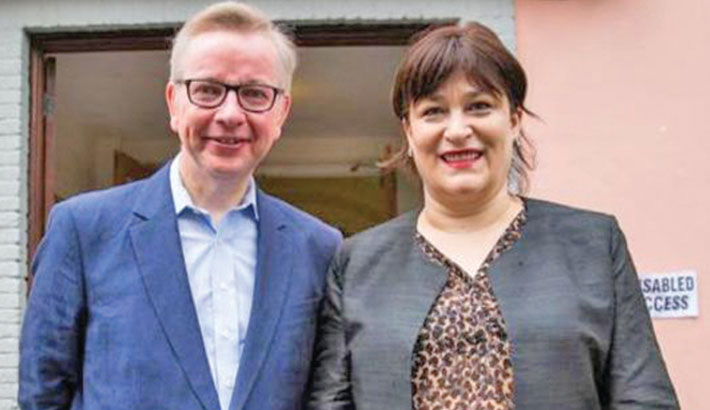 LONDON: British Cabinet Office Minister Michael Gove and his journalist wife Sarah Vine have “agreed to separate”, a joint spokesman for the couple has said on Friday, reports BBC. The pair are “in the process of finalising their divorce”, the spokesman added. Gove and Vine, a columnist for the Daily Mail, have been married since 2001 and have two children.

A friend of the couple told the PA news agency they had “drifted apart” and “no-one else is involved”.

“This is a difficult and sad decision for Michael and Sarah after 20 years of marriage,” the friend added. “It is an entirely amicable separation and there is no-one else involved. “They have drifted apart over the past couple of years but they remain friends. “Their absolute priority is the children.”

The couple, who met when they both worked as journalists on the Times newspaper, were among the most high profile couples at Westminster. Vine has written in her Mail column about how they fell out with close friends David and Samantha Cameron, over Gove’s decision to campaign for Brexit in the 2016 referendum. In a recent newspaper column, Sarah Vine wrote about the strains of being married to a minister, in a piece about former Health Secretary Matt Hancock’s affair with an aide.

She wrote that Westminster “can change a person”, adding that “the problem with the wife who has known you since way before you were king of the world is that she sees through your facade”. The piece added: “She knows that, deep down inside, you are not the Master of the Universe you purport to be”.

Born in Edinburgh in August 1967, Gove was adopted when he was four months old by a family in Aberdeen.

He studied English at Oxford University, where he was president of the Union.

He was elected Conservative MP for Surrey Heath in 2005 and has held a string of high profile ministerial roles, including Education, Environment and Justice before moving to the Cabinet Office.

As justice secretary, he was one of the key figures in the 2016 Vote Leave campaign alongside the then London mayor Boris Johnson.

When Cameron resigned as prime minister after losing the Brexit referendum, Gove initially backed Johnson to replace him.

But in a move that stunned Westminster, he dramatically withdrew his support and decided to run for the leadership himself.

He said he had decided “reluctantly but firmly” that Johnson was not capable of uniting the party or the country, but he failed to gain enough to support to win the contest.