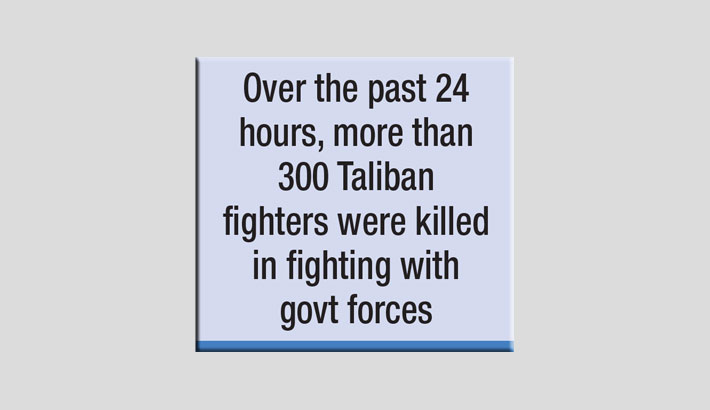 KABUL: Hundreds of Taliban fighters were killed in fierce battles with government forces across several provinces of Afghanistan, officials said on Saturday, as Washington announced it would finish withdrawing its troops from the country by the end of August, reports AFP.

Washington’s announcement came after all US and NATO troops vacated their main Bagram Air Base, from where the coalition forces led operations for two decades against the Taliban and their Al-Qaeda allies.

Over the past 24 hours, more than 300 Taliban fighters were killed in fighting with government forces, the Ministry of Defence said on Saturday.

Scores were killed in air strikes, including a pre-dawn assault on Saturday, in the southern province of Helmand, where the insurgents and government troops have regularly clashed. There have been fears that Afghan forces would struggle without the air support that the United States has provided.

“In recent days, the Afghan air force has intensified its air strikes against the Taliban hideouts and the insurgents have suffered casualties,” Attaullah Afghan, a member of Helmand provincial council, told AFP.

The Taliban rejected the government’s claims.

Both sides often exaggerate each other’s casualties and their claims are difficult to independently verify.

But since May 1 when the US military began its final withdrawal of about 2,500 troops, the two warring sides have clashed fiercely across the rugged countryside as peace talks between them have faltered.

As a result, the Taliban have seized dozens of districts in blistering assaults targeting government forces.

The insurgents have encircled almost all major cities across the country, and on Saturday claimed seizing seven more districts in the northeastern province of Badakhshan.

Top US envoy to Kabul, Ross Wilson, lashed out at the insurgents.

“The Taliban is using violent propaganda and hate speech to intimidate, threaten & attack Afghans on social media,” Wilson said on Twitter on Saturday.

“Violence and terror cannot create peace.” The Pentagon pressed on with its withdrawal to end America’s longest war.

On Friday, all US and NATO troops left Bagram Air Base, signalling that the military involvement for coalition forces was finally nearing its end.

Over the years, the mini-city north of Kabul has been visited by hundreds of thousands of US and NATO service members and contractors.

It has great military and symbolic significance.

“For many Afghans, Bagram is remembered as the hub for more than one foreign intervention, as it was the main air base for the Soviets throughout their occupation of the country as well,” said Andrew Watkins, an Afghanistan expert at the International Crisis Group.

“Not only has it been the entry point of most foreign troops that have passed through the country since 2001, it has been home to many of the in-country air assets that have lent the Afghan security forces such a vital advantage on the battlefield.”

The exit of foreign troops from Bagram has further fuelled concerns the country might slide into new civil war, as in the 1990s after the Soviets left.

“I see history repeating. The Americans are doing the same what the Russians did. They are going without ending the war,” said Kabul resident Dawood Hotak.

“I feel our country will slide back into another civil war as the Taliban have intensified their attacks and the Americans are exiting.”

US President Joe Biden attempted to ease these concerns at the White House on Friday.

He said the US military is keeping an “over the horizon capacity” which could bring firepower to help the government and its forces if needed.

Media reports say the Pentagon will probably retain about 600 troops in Afghanistan to guard the vast US diplomatic compound in Kabul.

White House Press Secretary Jen Psaki also said that the exit of foreign troops from Bagram did not mean that the overall withdrawal of foreign forces would be completed within days.

Foreign troops would be out of Afghanistan “by the end of August”, she said, closer to the September 11 deadline set by Biden.