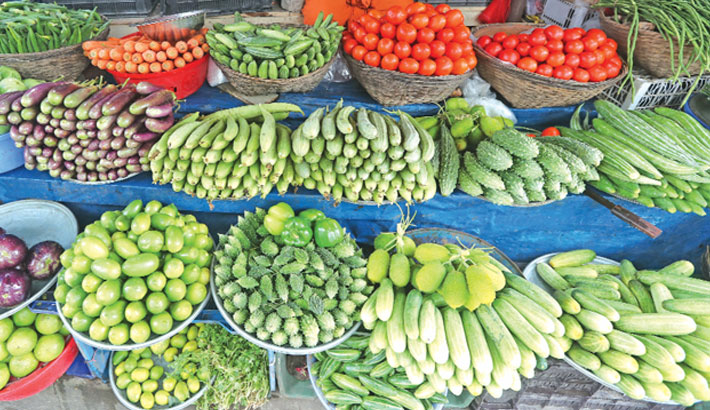 Prices of vegetables increased while the prices of chicken, egg, onion and some other essential commodities remained unchanged at different kitchen markets in the capital amid the nationwide strict lockdown.

During a visit to several city kitchen markets on Friday, it was found that most of the vegetables are being sold at high prices compared to the last week.

Vegetable sellers have said the supply of vegetables has reduced in the market due to strict lockdown and consequently the price has increased.

Prices of all kinds of vegetables have increased. The price of eggplant has gone up in one week and is being sold at Tk50-70 per kg, which was sold at Tk40-60 per kg last week.

Price of per kg carrots has also increased. Carrots were Tk80 per kg last week but now being sold at Tk100 per kg.

Besides, per four pieces of green bananas are being sold at Tk35-40. A piece of bottle gourd was sold at Tk60-70, per kg of arum lobe at Tk50-60, papaya at Tk40-50 and bitter gourd at Tk70-80. Prices of all these vegetables are remaining unchanged compared to the last week.

Milan Mia, a vegetable trader at Karwan Bazar Kitchen Market, said, “Supply of vegetables have dried up in the market amid strict lockdown. But price has not increased much. There are fewer buyers in the market due to the rain. That is why vegetables are being sold at an affordable price.”

Apart from chicken, prices of beef and mutton remain unchanged. Beef is being sold at Tk580 to 600 per kg. Consumers were buying per kg mutton at Tk800 to 900.