People’s movement comes to a halt 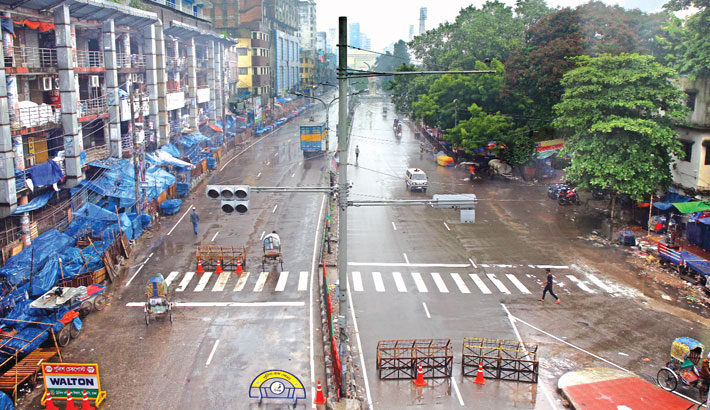 A usually busy street in the capital’s Gulistan area is seen almost empty on Friday, the second day of the strict nationwide lockdown imposed to check further spread of the coronavirus. – Reaz Ahmed Sumon

Public movement on the roads across the country decreased significantly in fear of legal actions on Friday, the second day of a weeklong strict lockdown meant for containing the surge of coronavirus.

But, alleyways were crowded while people were seen gossiping at tea-stalls as law enforcers were patrolling on the main roads.

Amid heavy rain, mobile courts, led by executive magistrates, conducted drives and law enforcers, including members of the Armed Forces, Border Guard Bangladesh (BGB) and Police, were patrolling the roads across the country.

Additional Deputy Commissioner (Gulshan Division) Kamruzzaman Khokon told the Daily Sun that much crowds were not seen on the roads due to the strict enforcement of the lockdown.

Earlier, the government on Thursday enforced a seven-day lockdown as the coronavirus infections and deaths are increasing by leaps and bounds.

In the last 24 hours till Friday morning, a record number of 132 people died of Covid-19 across the country and 8483 others were tested positive.

The capital looked deserted than the first day of lockdown as movement of rickshaws on the roads was thin and very few private cars were seen on important busy spots, including Farmgate, Shahbagh, Gulistan, Bijoy Sarani, Science Lab, Dhanmondi, Mirpur, Uttara, Banani, Malibagh, Kakrail, and Gulshan.

Law enforcement agencies put barricades and set up check posts in different places of the country to compel people to stay at homes.

Amid strict restrictions, some people came out home on different excuses, compelling the magistrates and lawmen to file cases, make arrest and realise fine.

As per continuation of bringing lockdown violators to book, on Friday the DMP arrested 320 people, filed 219 cases and realised Tk 5.45 lakh in fines for breaking the restrictions.

Speaking on the occasion, Additional Deputy Commissioner (Tejgaon Division) Mrittunjoy Dey Sajal told the Daily Sun that very few people were seen moving on the roads due to incessant rain.

According to the government restrictions, shopping malls, shops remained closed, but people were rushed to kitchen markets to buy essentials.

Besides, mobile court drives by local administrations and Rapid Action Battalion (RAB) arrested many people for breaching lockdown rules. They were also fined.

The RAB fined 213 people Tk 2.15 lakh by conducting 59 mobile courts across the country